Hydraulic equipment does a lot of work in the nacelle especially as OEMs design turbines with ratings of 2 MW and more. Just a few tasks that can use hydraulic power include pitch control, service braking, rotor interlocks, service-crane controls (which are more prevalent on larger turbine and especially those offshore), and to a lesser extent–nacelle roof movement. The cramped nature of some older nacelles put a premium on size but that trend has continued as nacelles were built larger in an effort to make things lighter.

In a nutshell, hydraulic trends focus on improving leak resistance and an overall reduction in maintenance (see the editorial this issue), smaller and lighter equipment, and versatility, such as an ability to mount in different locations. All that leads to increasing system complexity. Unconventional applications are also on the list such as expanding the use of hydraulics in wind transmission drives. At this writing, it is mostly a research project.

As in other areas of the wind industry, hydraulics system designers are looking for ways to improve turbine operating efficiency while reducing maintenance. This leads to a focus on preventative maintenance, rather than just replacing worn parts with new ones from the OEM.

According to Rohr, proactively managing oil contamination and preventive maintenance on fluid-power systems help keep turbines in peak operating condition. “Old-school maintenance programs of replacing worn parts with new ones at regularly scheduled intervals are being quickly succeeded by preventive maintenance ideas that extend part life, and then supplement that with replacement-part strategies offering equal or better parts at a lower cost,” he explains.

Dheeraj Choudhary of Parker Hannifin’s Renewable Energy Division agrees, saying that combining the power density and weight benefits of hydraulics with electronics can make turbines more reliable and precise. “Sealing and connector technologies allow field replacement and repairs without the use of heavy tools or welding equipment on-site, and they enhance the life of rotational devices such as bearings, the gearbox, and generator,” he says. Choudhary explains that fluid-power plays an important role in turbine gearboxes. For instance, recent hydraulic systems cool and condition gearbox oil and constantly monitor temperature, pressures, vibration, oil particles, and moisture. This helps reduce downtime, gearbox failure, and expensive repairs.

Groups are also doing research to expand the use of hydraulics in wind energy. The Center for Compact and Efficient Fluid Power (CCEPF), a National Science Foundation engineering research center, recently launched several projects related to hydraulic applications in wind. One included a grant to study hydrostatic drives for wind transmissions. Brad Bohlmann, Sustainability Director for CCEFP says that engineers are investigating using hydrostatic transmissions (HST) in wind applications. “HSTs have been a dominant choice for off-highway propulsion systems for more than 50 years,” he says. “There are literally millions of HSTs in use worldwide in demanding commercial applications where performance, durability, and reliability are critical. Thus, the technology has a long and successful track record, and the proposed turbine drivetrain proposed herein builds on a legacy of success.”

Using a hydrostatic transmission to create a variable speed wind turbine has several other advantages. NREL studies have shown that a variable-speed wind turbine using a continuously-variable mechanical transmission has potential to extract more energy from wind than a fixed-speed system. The transmission also eliminates the power electronics required on conventional large turbines drive trains. The HST could potentially provide variable rotor speed with reliable and efficient permanent-magnet generators, which would eliminate need for maintenance-prone slip rings. “Replacing the conventional, gearbox-driven drivetrain in a wind turbine with a hydrostatic transmission has the potential to simultaneously improve reliability and increase system efficiency,” Bohlmann says.

As system complexity increases, how components interact plays a greater a role in system reliability. In systems as complex as today’s blade-pitch controls, properly matching the operational characteristics of individual components can have great impact on overall system efficiency, performance, and reliability.

The trend suggests a single-supplier design philosophy as opposed to a mix-and-match approach. Regardless of which manufacturer’s products are chosen, experience, says one manufacturer, shows that a system is more likely to be successful when all major components come from one company. The single-supplier approach also impacts ongoing reliability and operating costs of a system, says the manufacturer, when the supplier maintains a parts and service footprint that matches the global distribution of wind turbine installations. This is important when one considers the geographic locations in which wind projects are likely to be installed–just about anywhere.

Experience shows that minimizing the number of manufacturers involved in each design step and taking a big picture approach is one of the best ways to maximize the probability of a successful wind turbine hydraulic outcome.

Valve selection provides another example of the complexity of the designer’s task. Selecting the right hydraulic proportional valves for blade pitch controls (BPC) is a critical step.

From a functional viewpoint, valves in a BPC system are not required to do anything particularly difficult or unusual. They simply control the flow of fluid to cylinders in response to sensor signals in a fairly straightforward closed-loop servo control circuit. What is unusual is that the valves are housed atop a several-hundred-foot vibration prone tower in horrible weather. Testing confirms that proportional valves reliably operate in harsh conditions without failure.

Such valves are subject to temperature extremes, high and variable rotational and vibration loads, and long periods between maintenance. That trend is not likely to change. Servicing such valves requires the attention of highly specialized personnel who can climb and don’t mind working at heights while lugging up equally specialized safety equipment in addition to normal tools.

These factors combine to increase the premium placed on BPC valve reliability. Standard testing protocols will not sufficiently stress a valve to prove its ability to perform under the extreme conditions.

In standard life testing, the operating parameters of an application are known and the test sample is subjected to a test within them. Simple product survival is considered a success. So to push the trend toward greater reliability, one manufacturer company has adopted a more rigorous protocol called Highly Accelerated Life Testing (HALT) to help it better understand the performance of hydraulic valves operating under the harsh conditions found in wind-turbine nacelles. HALT uses parameters well outside those encountered in the typical service life of the application and then tests products to failure. HALT results let a team of hydraulic designers focus on making, for example, a valve more reliable in the areas where a failure is most likely. More important, HALT gives the company an objective, documented, and repeatable way to qualify its brand of proportional valves, the series the company recommends for wind turbines.

In response to the wind industry’s need for more precise control, one series proportional valves are being equipped with an improved control interface featuring CANbus communication using the CANopen protocol. These integrated electronic controls are packaged to industry IP67 environmental standards to meet the needs of the next generation of wind turbines.

Particular wind turbine models are not yet produced in great numbers so hydraulic equipment manufacturers expect to do a little customization. One power pack has control for different modules, each of which performs a separate function. To cater for different oil volume requirements, the length of the tank can be extended. The two-liter standard tank can be expanded to hold up to a maximum of ten liters when required. It has a max operating pressure of 700 bar and a flow rate of 10 lpm.

And should a power pack become disabled, as might happen during a power outage, what might provide power to feather the blades and lock the rotor? Accumulators provide that temporary hydraulic pressure and flow. The devices let turbines continually extract maximum power during fluctuating wind speeds.

Accumulators are a fail-safe source of auxiliary power to activate the calipers of the high-speed shaft and yaw brakes. The brake force holding time requirements for unplanned shutdowns are significantly increasing as wind turbines grow in size. For instance, a hold time up to 500 hours is common.

Piston and bladder accumulators are used in wind turbines, and one manufacturer of metal bellows is also touting its advantages of many cycles and no leakage . While design decisions may appear straightforward, each type of accumulator has advantages and limitations that should be considered. These include response time, system speed, mounting orientation, fluid type, pressure, temperature, diagnostic characteristics and maintenance and service intervals as well as the cost for servicing and downtime. Recently, accelerated tests of piston-versus-bladder accumulators for wind turbines point to precharge loss as a major service and safety issue with bladder accumulators. WPE 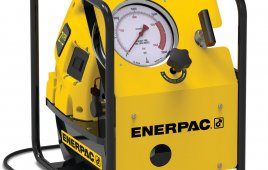