These comments are from the Assistant Secretary for Energy Efficiency and Renewable Energy, David Danielson. 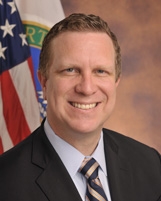 This is in part due to the fact that the winds of competitiveness have begun to blow back in the direction of the United States, including increasing wage rates overseas and a growing appreciation by American companies of the importance of co-locating manufacturing and innovation to maintain their competitive technology edge.

And the Administration’s support in rebuilding U.S. manufacturing, especially in the clean-energy manufacturing area, has also played a major role in America’s advanced manufacturing renaissance. Significant increases in U.S. shale gas production and the attendant decreases in U.S. natural gas prices are making America a more competitive destination for energy-intensive manufacturing across the board. At the same time, rapidly growing markets for a wide array of new clean energy products are also presenting a “once-in-a-generation” opportunity for the United States to capture a large and growing share of the manufacturing and jobs associated with this $300 billion per year set of markets. And these markets are expected to rapidly grow into the trillions of dollars per year as the cost of these technologies continues to drop through innovation and scale.

Just prior to this posting,  leaders in science and industry gathered at the Energy Department and the Council on Competitiveness’s 2015 American  Manufacturing and Competitiveness Summit in Washington, D.C. to showcase and celebrate the tremendous accomplishments to date of the Energy Department’s Clean Energy Manufacturing Initiative (CEMI), launched just two and a half years ago. Secretary of Energy Ernest Moniz and Secretary of Commerce Penny Pritzker, in addition to senior executives from Alstom, Whirlpool, Siemens, and a wide variety of other leading companies, shared their perspectives about the biggest successes and remaining challenges and opportunities they are seeing in energy and manufacturing. Innovation leaders from the Energy Department and its national labs also discussed exciting new partnership models such as Lab-Corps –a training curriculum for National Lab researchers to accelerate the commercialization of their technologies – and the Small Business Vouchers pilot, which is making available $20 million for national labs to strike up research partnerships with more than 100 small businesses over the next two years.

American companies and our national labs pulled out all the stops to give attendees a close-up look of some of the new high-impact technologies that are resulting from CEMI-supported research and development (R&D). Oak Ridge National Laboratory rolled in the 3D-printed Shelby Cobra, made possible through a collaboration with industry partners and resources at Oak Ridge’s Manufacturing Demonstration Facility. Not to be outdone, Magna International and Ford Motor Company showcased their Mach 1 multi-material lightweight vehicle. Developed in cooperation with Cosma International and the Energy Department, this vehicle integrates high strength steel, advanced aluminum alloys, and carbon fiber composites to make a vehicle 23% lighter than today’s Ford Fusion, improving fuel economy by up to 15%, and essentially lowering it one full weight class.

Not only was the AEMC Summit a perfect opportunity to celebrate successes, but it also was a key time to regroup and chart the future course of clean energy manufacturing in America. At the Summit, we announced a number of exciting new initiatives, including the launch of a new competition for a $70 million Innovation Institute on Smart Manufacturing, and the launch of a new Manufacturing Demonstration Facility focused on high performance computing for manufacturing and an associated $3 million competitive partnership opportunity. We also announced the five awardees of a $22 million Next Generation Electric Machines funding opportunity – focused on developing a next generation of wide bandgap power electronics-enabled ultra-efficient industrial motors –and the seven pioneering national lab-industry pairs who will be participating in CEMI’s Technologist in Residence pilot. Under the pilot, top technologists from national laboratories and industry will work together, with a significant focus on “in-residence” activities within each other’s facilities, to map out a comprehensive long-term joint research agenda.

With these exciting and innovative new R&D partnership models and others being launched by CEMI, I am convinced that the United States will compete and win more than its fair share of the clean energy manufacturing economic growth and jobs that lie ahead of us in the years and decades to come. Let’s keep up our great work together to make that exciting future a reality.

Learn more about the Energy Department’s Advanced Manufacturing Office and the Clean Energy Manufacturing Initiative, which aims to boost U.S. manufacturing competitiveness in the global marketplace.