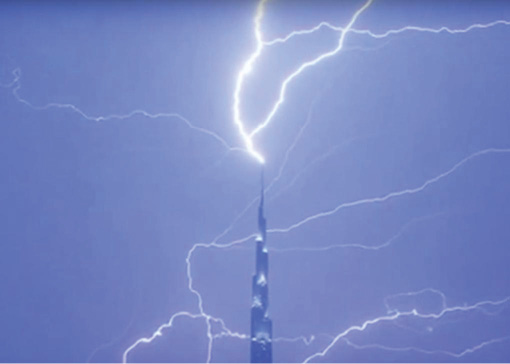 A lightning strike to a turbine blade can punch a hole in it or flash steam trapped water, destroying the blade.

A RECENT INVENTION OUT OF SPAIN promises to eliminate lightning hits to structures such as wind turbines and stadiums. Cloud-to-ground lightning strikes when electric charges on earth and opposite charges in a storm cloud overcome the resistance provided by the air that separates them. “Rather than provide just a low-resistance path to ground, as existing grounding systems do, the HALO Lightning Suppressor grounds out earth-based charges thereby creating a deionized space that prevents the meeting of lightning streamers from ground and cloud,” says Jay Kothari president of EMP Solutions, the sole distributor in North America. Upward streamers are eliminated by grounding out positive and negative charges at a high rate, up to 640,000 V/microsecond.

Effective lightning protection has eluded turbine engineers. For instance, Ben Franklin’s still-used lightning rod, like HALO, relies on a strong and reliable grounding system that creates a low-resistance pathway for ions to earth. DAS, another system, looks like an umbrella without its covering. “You see them most in Florida. It works as a dissipater by drawing charges up from the positive ground charges and dispersing them through its many points. But the DAS is a large bulky system not viable for wind turbines.”

The Halo deionizing device works like a capacitor. The top and bottom of the aluminum domed portions are separated by a disk of insulating PVC. Positive and negative charges collect on opposite sides of the disc. Draining one charge to ground prevents ground originating streamers from reaching those coming from the clouds.

And the ESE, or Early Streamer Emitter, collects charges, “like our system but instead of grounding them, it produces its own upward streamer and attempts to send it away from the structure under protection. However, it has been banned in Europe because it was causing damage to adjacent structures. ESE is not banned in the U.S.,” he says.

What’s more, a wind turbine has two issues, says Kothari. “The first issue is the problem caused by atmospheric lightning, and second, because the turbine is spinning, it generates its own electrical field. So you have the static from the turbine as well. The solution is to deionize the air passing overhead and dissipate the static charge generated by the spinning blades. For that, we install a unit inside the tower to pull some the static electricity off the blades and send it to ground. And we install a unit on top of the turbine to dissipate the charges generated by the storm cloud. The two devices provide a huge area of protection. A single device can protect a 100-m radius or about 337,000 ft2 of space,” he says.

“Those areas prone to lightning, such as in Florida, may need a beefier grounding system. So each application is custom engineered,” says Kothari. He adds that for the last 10 years, the device has had a 100% success rate in Europe protecting any structure or area from the threat of lightning including towers, antennas, marinas, oil and gas storage, and more. In fact, the manufacturer offers a $500,000 liability policy towards any damage or injury that occurs from a lightning strike while the unit is properly installed.