The N117/2400 from Nordex is the most recent addition to the company’s Gamma Generation of turbines. The model is intended for light-wind sites, creating power generating potential for previously nonviable locations across the nation. A glimpse inside the N117, shows the turbine’s components.

The company says that with a 2.4-MW max output, a 117-m rotor diameter, and a rotor sweep of 10,715 m2 (almost 3,000 m2 more than previous models), the N117 is the highest-yielding IEC 3 turbine in its class. It will reach a capacity of over 3,500 full-load hours at a typical site, outperforming other IEC 3 turbines by up to 20%. This translates into a capacity factor of 40%. Furthermore, the N117 has 58.5-m rotor blades, the largest turbine in its category. The manufacturer has kept the blade profile and connection system the same as previous models (the N80, N90, and N100) and geared the rotor dimensions to the requirements of lower wind locations. Carbon fiber-reinforced plastic also ensures the blade’s structural stability. 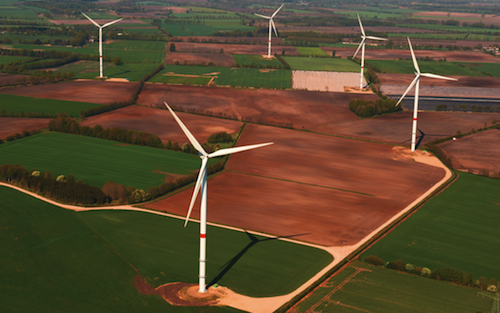 The N117’s 2.4-MW max output, along with its large rotor diameter and swept area, make it a high-yielding turbine even in light-wind locations.

Attractive wind locations can be close to residential areas. Thus, the turbine’s acoustic power level is limited to a maximum of 105 decibels, allowing use closer to residential areas, as well as optimal turbine layout at wind farms. Also, the model’s hub height on a standard 91-m tubular steel tower totals 150-m, which remains below the 500-ft FAA threshold.

The turbine also features a combined spur and planetary gearbox that turns a 660-V, double-fed asynchronous generator with a liquid and air cooling system. The N117 is PLC controlled and also has a remote-controlled surveillance system. Grid connection is via IGBT converter. Manufacturing the N117 will begin in July 2012 at Nordex’s U.S. plant in Jonesboro, Arkansas—which opened in October 2010. All of the company’s turbines made in the U.S. contain more than 75% domestic content.

Filed Under: Turbines
Tagged With: N117/2400, Nordex, Turbine of the Month