A cross section of the M5000, shows some of its internal components. 1. Rotor bearing/gearbox: A double-tapered roller-bearing connects the rotor with the machine housing, preventing rotor loads from harming the gear meshing. 2. Rotor: Load-bearing elements of the rotor blades are made of carbon fiber, ensuring high stiffness at low weight. Also, the blade pitch system is inside the closed rotor hub. 3. Air-treatment: Draws in external air and filers salt and moisture that could corrode components. 4. Generator/convertor: The rotor, mounted on the gearbox's output shaft, doesn't need its own bearings. The generator connects to the grid through a converter that allows maximum speed variability and compliance with all grid directives.

The M5000 is well suited for offshore use because it is powerful, yet relatively compact and lightweight.  The nacelle and rotor combined weigh only about 349 tons.   This makes the turbine easier to transport and erect, crucial when working on the open sea.  The nacelle is fully assembled on land by the Areva technicians, to allow lifting it onto the tower as a complete unit.  This trims time and cost, while increasing safety.  More so, the company says the nacelle’s reduced weight permits a cost-effective tower and foundation.  The components’ compact placement in the nacelle stems from studies of conventional turbines.

The turbine’s low rotational speed along with a small number of rotating pats and roller bearings minimize the risk of drive train damage.  In addition, all key subsystems and sensors are installed in duplicate, so their failure doesn’t result in a shutdown. Condition monitoring keeps tabs on components’ and report irregularities, which makes maintenance work easier to schedule and more efficient.

Protecting turbine equipment from corrosion is vital to its service life, especially offshore.  To that end, the M5000 has an air-treatment system that filters corrosive elements from outside air.  This creates and overpressure of purified air within the entire system, thus protecting it from external corrosive influences such as salt and moisture.

The turbine’s components are shipped to Areva’s manufacturing facilities in the German coastal city of Bremerhaven. Here, they are assembled at a location ideal for transporting the turbines directly to offshore installations. 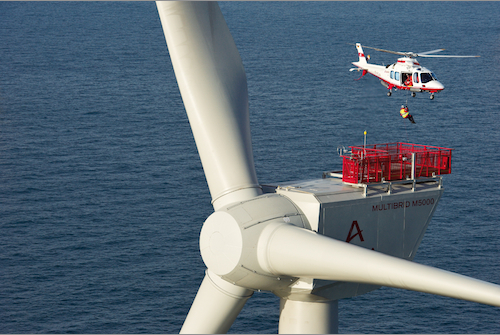 Areva recently signed TSA & SMA Agreements with Trianel GMbH (a consortium of German regional utilities and communities) for the Borkum West II project, and will provide 40 turbines (200 MW). Both projects will be installed in 2012-2013 and commissioning is scheduled for 2013.  In total, Areva’s 5-MW wind turbines support an order backlog of 1,000 MW (1 GW) in offshore projects.