The Windmatic 17S turbines selected for the project were re-manufactured and designed to work with the Alaskan village’s existing diesel generators and endure the harsh climate.

About 50 miles south of Bethel, Alaska, and 50 miles north of the Bering Sea lies Tuntutuliak (locally referred to as Tunt), a tundra village of about 400 Yup’ik Eskimos. Most of the residents here survive off the land through subsistence hunting, fishing, and berry picking. The community is almost entirely surrounded by water.

Remote villages such as this one traditionally rely on diesel generators to produce power for heating and electricity. With the combination of rising diesel prices and high transportation costs, power costs run at about $0.65 per kilowatt-hour (kWh) if not more, making the expense of living quite high in Tunt, and they aren’t the only ones. More than 50 similar villages in the region all struggle with the cost of energy.

A few years ago, Tunt began to defray the high price of diesel by harnessing its extensive wind resources. Five wind turbines were installed in 2012 as part of a consortium with local governments and three other neighboring villages. The Chaninik Wind Group (formed by the Alaskan United Tribal Governments of Kongiganak, Kwigillingok, Tuntutuliak, and Kipnuk) was awarded $750,000 from the U.S. Office of Energy Efficiency and Renewable Energy (EERE) to implement a multi-village, wind and smart-grid system. The goal was to reduce fossil fuel consumption by 40% in each of the four tribal villages and to implement wind energy to displace 200,000 gallons of diesel fuel.

The Windmatic 17S turbines selected are 95-kW units manufactured from scratch and designed to work with the village’s existing diesel generators and endure the harsh Alaskan climate. As if to emphasis the severity of the weather, the barge carrying the rotor blades to the construction site was iced in close Bethel and stranded about 40 miles from Tunt. Undaunted, members of the local utility constructed a large sled pulled by snowmobiles for the last leg of the trip.

The results: electric costs have significantly dropped. The wind energy used for heating is controlled, metered, and provided to tribal members at a 50% discount off their original fuel costs. According to the EERE website, the average homeowner in the village consumes an estimated 766 gallons of heating fuel at more than $6.24/gallon ($4,780). In some circumstances, this is more than 60% of a household budget. Turbine maintenance also requires some innovation. As you can imagine, weather and geography make it impossible to simply call up a service crew when something goes wrong with a turbine in Tunt.

To address this concern, several features were incorporated into the turbines to facilitate preventative maintenance. Remote monitoring is essential. Aside from the challenges involved with a last-minute maintenance call, turbine downtime could mean lost of heat in the village or a costly reliance on more diesel power.

Other issues also became apparent during tower construction. Cables engineered to withstand the extreme weather conditions were installed, but cable entanglement proved a concern. Because turbines point into the wind to capture as much power as possible, cables running from the generator down often become wrapped around the tower. This problem is usually resolved easily by rotating the head to unwind the cable, but this is typically a manual job. It’s also a job easy to forget and unlikely to get done during an Alaskan winter.

So, an auto-unwind feature was added to the turbines to avoid downtime and service calls to Tunt. But the design took engineering time and effort to ensure reliability given the climate. Encoders were directly coupled to the head of each turbine. These industrial encoders provide precise angle measurements that adjust to the yaw angle of a turbine. They also track the precise position of each turbines based on a pre-set “home” location. The design allows for positional information to continue even if power to the system is momentarily lost. 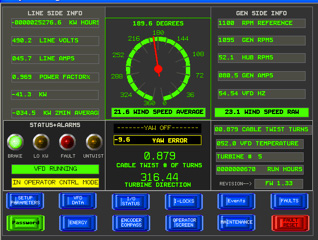 Tracking the precise location of each turbine in Tuntutuliak, Alaska, the encoders send data back to a main control system in Colorado. Here is a screenshot of some of that data.

As a turbine rotates, the auto-unwind feature now tracks the number of twists in the cable. Whenever the cable meets a pre-set number of turns, the system shuts down the generator for a short period and rotates the twists out of the cable. After repositioning, the generator comes back online and the process starts anew. Each turbine’s current location and each cable’s position are monitored from headquarters in Colorado. An added benefit of using encoders is that the data can serve researchers and governments track patterns in wind and weather for future studies.

Because winds are much stronger during winter months in Tunt, about 30 homes were outfitted with residential electric-thermal storage devices. These units store excess wind power generated in the winter to help heat the homes when needed. Smart-grid technology was also installed in nearly all of the village’s homes to monitor electricity usage. The meters let the local utility access usage data so they can better predict power use, potential repairs, and even which homes could use weatherization.

Between the encoders tracking the wind turbines and the smart meters tracking in-home power use, Tuntutuliak and the neighboring villages are saving enormous costs in power. By using far less diesel fuels, they’re also saving the environment from unnecessary emissions and greenhouse gases.