Albertans now have access to twice as much wind power as they did before. Energizing the Southwest 240-kV Project, a 90-km transmission line between Pincher Creek and Lethbridge is a vital link connecting wind generated power in Alberta’s southwest to the rest of the province. 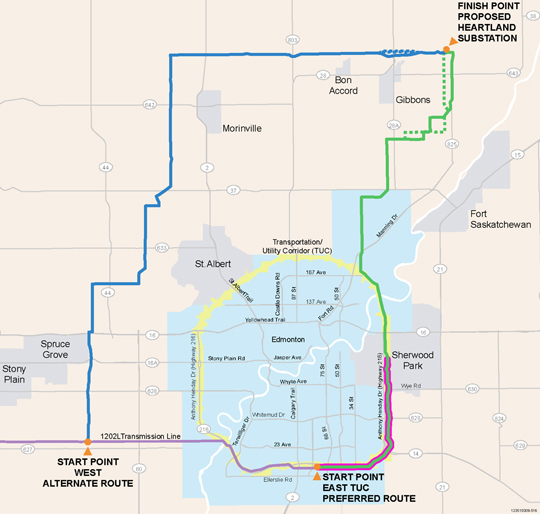 Routes have been selected based on locations with the lowest overall impact. (www.heartlandtransmission.ca)

“Albertans tells us that increasing access to more renewable energy is important,” says Scott Thon, AltaLink CEO. “This line strengthens the existing electrical transmission system in the southwest region of Alberta and will allow for 1,000-MW of new wind-generated electricity to reach homes and businesses throughout the province.”

But officials say Alberta is only scratching the surface of its massive wind energy potential. Wind power currently represents 5% of the total installed generation capacity. “Without new transmission, new electricity generation cannot be utilized,” says Alberta Energy Minister Ron Liepert. “Projects like the Southwest 240 kV are part of an enhanced transmission network to move electricity from product to market, ensuring Albertans have a reliable source of energy when they flick the switch.”

Construction of the new transmission line and substations in 2009. Many local First Nations people worked on the project, and more than 80 Alberta businesses were also directly involved. Construction activities may continue in certain areas, as crews work to reclaim project areas.