Lawrence Berkeley National Laboratory (Berkeley Lab), in collaboration with public and private partners, has released the most comprehensive publicly available database yet of U.S. wind turbine locations and characteristics. The United States Wind Turbine Database (USWTDB) will allow unparalleled ability for government agencies and others to make planning decisions. 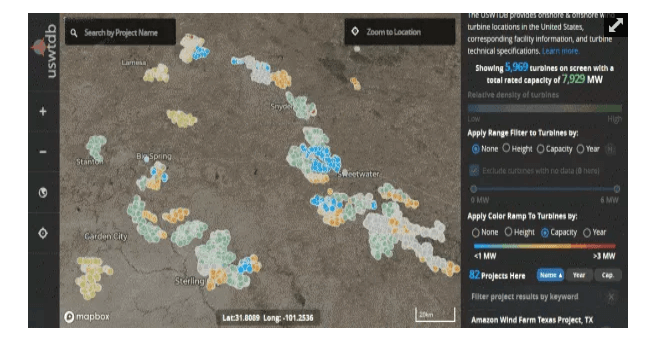 The United States Wind Turbine Database is unprecedented in its ability to search and sort the U.S. wind turbine fleet. (Berkely Lab)

The USWTDB, funded by the U.S. Department of Energy’s Wind Energy Technologies Office and developed as part of a public-private partnership with the American Wind Energy Association (AWEA) and in collaboration with the U.S. Geological Survey (USGS), is more accurate and comprehensive, and will be regularly updated more often than existing publicly available wind turbine datasets.

By sing the USWTDB Viewer, federal agencies will be able to share data to properly account for wind plants in development planning.

“Our collaborative arrangement with AWEA and USGS allowed us to merge the separate proprietary datasets from each of our organizations and combine them with those from the U.S. Federal Aviation Administration, which enables an unprecedented view of the U.S. turbine fleet,” says Ben Hoen, a research scientist and the project’s lead at Berkeley Lab.

For example, the U.S. Departments of Defense and Homeland Security and the National Oceanic Atmospheric Administration have been using the database already to perform crucial operational impact assessments of wind turbines on radar. Other examples of uses for the data include studying wind energy and wildlife interactions, reviewing economic impacts assessments of wind energy’s deployment, and better understanding of local wind deployment trends.

”Wind power’s rapid growth as part of the diverse U.S. electricity mix can be seen and better understood with this wind turbine dataset,” said John Hensley, Senior Director of Research and Analytics for AWEA. “We’re pleased to have contributed AWEA data to this valuable resource, working in close concert with Berkeley Lab and USGS to advance the public interest.”

AWEA is the national trade association of the U.S. wind energy industry. It represents 1,000 member companies and over 100,000 jobs in the U.S. economy.

With the release of the USWTDB, data that were previously scattered across many datasets and in some cases unavailable to the public have been released to the public in a single package. The Database currently contains data from more than 57,000 turbines constructed from the 1980s through 2018, in more than 1,700 wind power projects spanning 43 states plus Puerto Rico and Guam.

The USWTDB Viewer, the development of which was led by USGS Eastern Energy Resources Science Center, is unprecedented in its ability to search and sort the U.S. wind turbine fleet. Users can interact with the data using multiple filters and colorings to allow wind projects across counties, states, or regions to be quickly scanned for unique qualities.

The full dataset can be downloaded with a few clicks in a variety of formats, and users can connect to the underlying data and incorporate the Viewer into their own website. The database includes wind turbine locations and characteristics, including make and model, total height, hub height, rotor diameter, year of installation, and rated capacity to produce electricity.

More information from the North American Aerospace Defense Command (NORAD), USGS, and the U.S. Department of Energy (DOE) about this project is contained in the DOE/USGS announcement. The Berkeley Lab effort was supported by the DOE’s Wind Energy Technologies Office.

The team that developed the USWTDB will host a one-hour webinar on April 23 at 2pm. Eastern to provide details on the data and viewer. Register here to join.