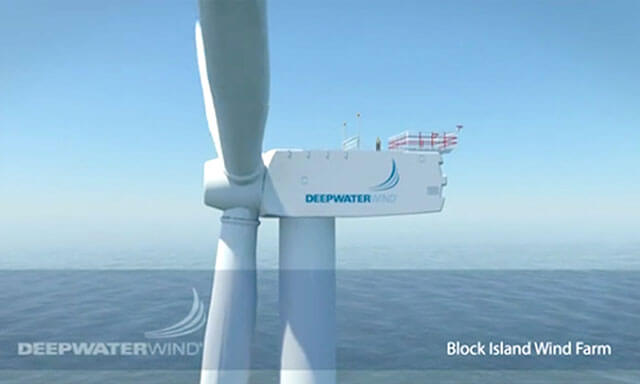 The first components for assembly of Block Island’s offshore wind turbines will soon arrive by ship at a temporary manufacturing facility at the Port of Providence.

Deepwater Wind and GE are establishing a new temporary manufacturing facility at the Port of Providence for the assembly of turbine components for the Block Island Wind Farm.

This week, the first five of 15 total tower sections are expected to arrive by ship in Providence. Those 95-foot tall sections will be off-loaded at the new temporary manufacturing facility that GE is building at the Providence port.

All told, more than 300 local workers will be involved with building America’s first offshore wind farm.

“Rhode Island continues to lead by example with the construction of the nation’s first offshore wind farm,” Governor Gina M. Raimondo said. “This innovative project is being assembled by local workers right here in the Ocean State. By working with our partners at Deepwater Wind and GE, we are advancing important energy and environmental goals while also creating local jobs that get Rhode Islanders back to work.”

“From Providence and Quonset Point to the waters off Block Island, the Ocean State is leading the growth of a new American industry,” said Deepwater Wind CEO Jeffrey Grybowski. “This work at ProvPort brings one of the world’s most innovative companies to the City of Providence. And, just as important, we’re putting more Rhode Islanders to work and giving them the experience they need to help grow this industry.”

“Expanding the economic opportunities at Providence’s port is a priority of mine,” said Providence Mayor Jorge Elorza. “This announcement is an important step as we continue to expand our economy and create good jobs in our city. I am pleased too that the City was able to help ProvPort expand to accommodate this project and I am excited to welcome Deepwater Wind and GE to our waterfront.”

“This is a major milestone for the Block Island project and for sustainable energy in the U.S. We are proud to be part of the team making it happen,” said Anders Soe-Jensen, President and CEO of GE’s offshore wind unit.

“We are pleased to support Deepwater Wind’s historic efforts to establish the first offshore wind warm in the United States. In addition to assisting Deepwater Wind with this project, we believe ProvPort is perfectly situated to continue to position Rhode Island as a leader in offshore wind development as we offer 3,500 feet of linear berthing space, 20 acres of open lay down area and 40’ of deep draft,” said Paul Moura, chairman of ProvPort’s Board of Directors.

The assembly activities at ProvPort will complement construction and staging work completed at Quonset Point, in North Kingstown, R.I. Fabrication of some of the foundation components was completed by local welders at Quonset’s Specialty Diving Services in early 2015, and the port continues to host construction and repair work and vessel staging for the wind farm. Quonset will also host the project’s long-term operations and maintenance facility.

“The tradesmen and woman of the RIBCTC are excited to start the manufacturing and assembly phase of the Deepwater Wind project, creating desperately needed work opportunities for our members right here in ProvPort,” said Michael F. Sabitoni, President of the Rhode Island Building and Construction Trades Council.

“The opportunity to work on a first-in-the-nation project alongside GE and Deepwater will no doubt grow our ability and workforce to be the hub for offshore wind here in the U.S.”

Meanwhile, Deepwater Wind is capping off a busy first offshore construction season at the project site, roughly three miles off the coast of Block Island.