The wind industry has a lot to be encouraged about if the forecasts from Bloomberg Energy’s Dan Shurey are correct. His research also found that the industry recognizes its rising O&M costs and shared a range of ideas for keeping the costs manageable. Shurey presented these ideas, findings, and more at the recent Wind Operator Congress in Chicago.

Shurey’s research began with surveys of more than 50 independent power producers (IPPs) and utilities that he ranks in Tiers. The accompanying table defines them and provides some of their thinking. 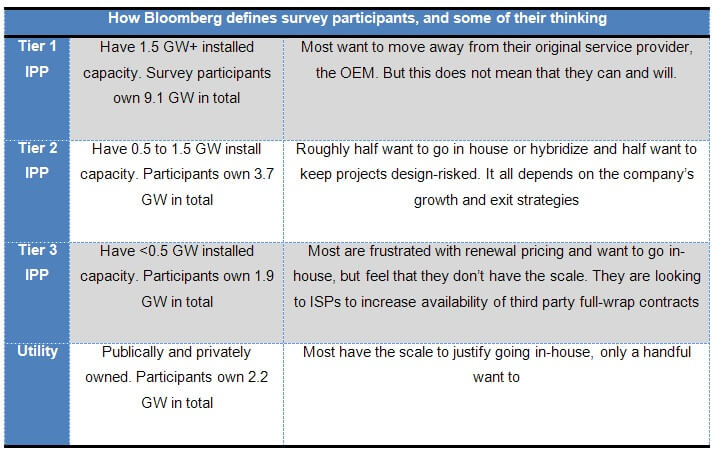 Other survey findings are that traditional fixed-price contracts are fairly substantial and comprise most of the market. “We are seeing an increasing escalation in O&M costs because of the understanding of the risks and nature of previous components costs,” he says. Shurey also sees escalating fixed-price contracts and for longer periods, from two to four and now out to seven years.

The survey and forecasts were to get an idea of how big the market is evolving. That however, depends on the extension of the tax credit. 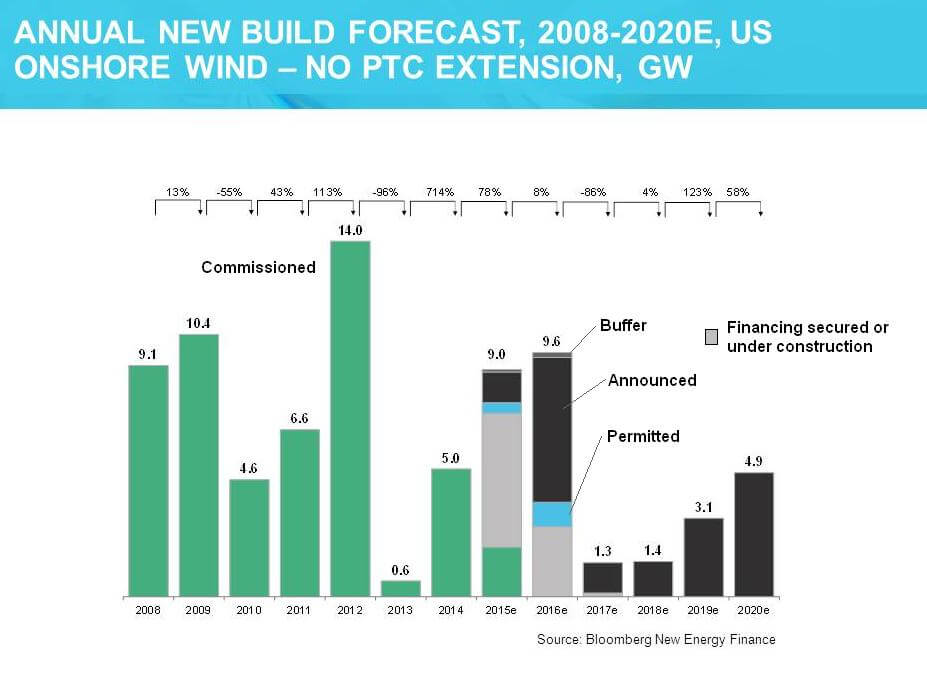 The bar graph, Annual new build forecast, no PTC, is Shurey’s current market forecast in the U.S. It is based on the assumption that the PTC will not be renewed after 2016. “Hence, we are pretty bullish through 2016. This is a bottom up forecast. That means for every project, we looked at its status along with its owner which leads us to think there will be a 10 GW market in 2016 with new builds dropping after that. That is essentially because there are so many projects, some that have PPAs ready to go, and some that have placed turbine orders. However, after 2016, construction will drop off a huge cliff again followed by a modest recovery. This market is left over from the PTC cycle, as well as under-filled PPA targets, and the occasional economic project that makes sense. Nonetheless, we are bullish long term,” he says. In his short term forecast (2015 to 2016), the probability of a project getting built depends on factors such as off-take status, developer size, interconnection status, permit status, and turbine order. For our post-PTC forecast – from the beginning of 2017 – the probability of commissioning relies more heavily on project economics: the availability of RECs, the average power-price forecast and wind speed, and how closely daily and seasonal wind speed correlates to on-peak pricing,” says Shurey.

A two year extension essentially simply moves his post-PTC forecast from the beginning of 2017 to the beginning of 2019. There is a little less certainty in this forecasting scenario, because it is harder to forecast and estimate power prices, capacity factors and RECs that much further into the future. “So we say the market can grow by 7 or 8 GW a year, until it drops again in 2019 and 2020,” he says.

Some of the market flux considered is which Tier 3 owners remain in Tier 3 or move up the ranks to become Tier 2 or Tier 1.

“It is no surprise that the Tier 1s dominate the market and they will grow aggressively for three reasons. First, they have the most aggressive development pipeline and will grow out their market share further. Second, many Tier 2s companies are on the cusp of becoming Tier 1. They are mid-sized at the moment but they have big pipelines for the next 10 years. And lastly, Yieldcos are making major acquisitions generating a flow of projects to the larger developers. The trend toward more Tier 1s is accelerated under a PTC extension,” says Shurey.

In addition to predictions, Shurey discussed market flux among asset owners. For instance, the size of the asset owner determines at what point they are ready to bring O&M in house. “The black line in Results: in-house related concerns is average at which all participants believe that they would be able to go in house,” says Shurey. “We see Tier 1s making the decision when they control about 1.6 GW, Tier 2s at about 1.4 GW, and Tier 3s at about 0.6 GW. The green line is the current installed capacity. T1 are already at that point, T2 are close, and T3 are nowhere near it. It is interesting to see that the bigger an organization they get, the bigger they think they need to be before going in house.”

Such companies do more cost analyses as they grow, and the more they research the cost of bringing maintenance in house, and the more expensive they realize it actually is, especially when they think about risk management and inventory. The cost of self-maintenance could become a bigger figure than the companies’ anticipated,” he says.