Prysmian secured these two projects in mid-2010 as part of overall contracts awarded to consortia between the company and Siemens Energy by the Dutch-German transmission system operator TenneT for the grid connection of offshore wind farms to the mainland. 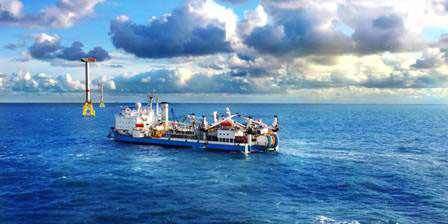 Siemens has now handed over HelWin1 to its client TenneT. The German-Dutch transmission system operator has now also put this grid connection into commercial operation. HelWin1 is the second HVDC grid connection to be handed over to TenneT in the first weeks of this year and links the offshore wind farms Nord See Ost and MeerWind to mainland Germany with a ±250 kV dc, 576 MW cable connection along a total route of 130 km (85 km submarine and 45 km land). At present, wind turbines with a total capacity of around 260 MW are linked to the grid connection, with new turbines being connected almost on a daily basis. The Meerwind Süd/Ost wind farm is made up of 80 Siemens 3.6 MW wind turbines.

Both BorWin2 and HelWin1 use extruded HVDC cable technology from Prysmian together with Siemens HVDC Plus converter technology at the offshore platform and onshore stations. Prysmian has also installed the multiple 155 kV HVAC submarine cables which connect the converter platforms to the respective individual offshore wind farm transformer platforms.

Siemens are Prysmian are currently implementing two more dc offshore grid connection projects, SylWin1 (864 MW) and HelWin2 (690 MW), which are both near completion and scheduled to take up commercial operation within the first half of 2015. Siemens received its latest order for a grid connection in the North Sea, BorWin3 (900 MW), in a consortium with Petrofac in the spring of 2014. Commissioning of this fifth grid connection from Siemens is scheduled for 2019. Prysmian is also implementing the HVDC cable systems for the DolWin3 and BorWin3 projects.

The grid connections implemented by Siemens for TenneT will have a total transmission capacity of theoretically more than 3.8 GW, providing electricity from offshore wind power to supply around five million households.