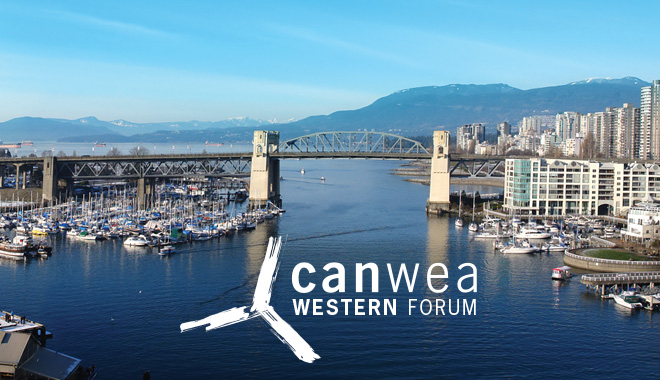 Last year was another record-setting year for Canada’s wind energy industry. In 2014, the country installed a total of 1,871 MW of new wind energy capacity, topping 2013’s high of just under 1600 MW. However, most of this growth was attributed to wind development in the east (Ontario had 999 MW and Quebec had 460 MW), with the western province of Alberta ranking in third with 350 MW.

“Wind energy represents a significant environmental and economic opportunity for western Canada,” said Canadian Wind Energy Association’s President Robert Hornung during his opening remarks at the recent CanWEA Western Forum in Vancouver, British Columbia. The event represents the wind community and the provinces of BC, Alberta, and Saskatchewan. “But we have only taken some initial steps so far, and the west has tremendous untapped wind resources available.”

Hornung referred to Alberta as the birthplace of wind energy in Canada, and today Alberta leads the west with 37 wind farms and a total capacity of almost 1,500 MW, supplying 4% of the province’s total electricity supply mix. A decent accomplishment considering Alberta has the third largest crude oil reserve in the world, next to Saudi Arabia and Venezuela, and produces over half of all Canadian crude oil from its sands. But many of those in the province are still looking for more sustainable energy options.

“Alberta’s BluEarth Renewables is currently moving ahead with its 29.2-MW Bull Creek project, after signing an agreement to supply power to a group of rural school boards throughout the province,” said Hornung. The Alberta Schools Commodities Purchasing Consortium (CPC) have undertaken an impressive pilot power purchasing strategy to reduce exposure to volatile energy costs by fixing prices through long-term power purchase contracting and more sustainable options.

“In British Columbia, there are five wind projects constructed totaling just under 500 MW, which represent 1.5% of that province’s electricity demands,” added Hornung. “In Saskatchewan, seven wind farms have a total of 221 MW, representing about 3% of the electricity demand there.” In terms of new growth, Hornung mentioned that Pattern Development has started construction on the 185-MW Meikle wind project near Tumbler Ridge, BC, within the traditional territory of Treaty 8 First Nations. “Commercial operation is expected next year, and will supply enough clean energy each year to power approximately 54,000 homes.”

Zero Emission Energy Developments has also signed agreements for three new wind energy developments of 15 MW under BC Hydro’s Standing Offer, a program that offers a streamlined procurement process for small, clean-energy projects in the province.

“We have a lot to be proud of in the west and have accomplished a lot,” said Hornung in terms of wind power in western Canada. “But the next 10 years aren’t poised to look like the last 10 years in terms of the need for new electricity supply.”

According to Hornung, there is currently too much uncertainty in the west to predict what’s next for wind power in this region of the country. “We are on the cusp of new policy decisions that will determine what the scope and shape of wind energy will look like in the future.”

The CanWEA President referred to a number of provincial changes in the west, including an upcoming election in Alberta and new power strategies. “In Alberta, the existing greenhouse gas regulatory framework is set to expire in June and we expect to see a new climate change strategy,” he said. “Plus, Saskatchewan has a new strategy that will layout its electricity supply plan for the next 10 years, and it includes a new wind strategy.”

In BC, the controversial Site C hydroelectric dam on the Peace River has been approved, which makes it difficult to predict what might come next. “There are strong signals that once the dam is built there will be reliance on independent power producers to provide future supply needs and to help close the gap left unfilled by BC Hydro’s conservation acts,” said Hornung.

But it’s unclear when BC will be in the market for new power with the Site C Dam and new LNG (liquid natural gas) projects being built along the coast. Declining oil costs have also cast uncertainty on future electrical growth in Alberta.

What is certain: “When there’s a need for new electricity supply, it has been shown repeatedly and globally that wind energy is a cost-competitive source.” Hornung referred to Alberta’s independent electric system operator forecast that demonstrated wind energy is the second cheapest option for new generation. “Wind energy cost will continue to decline,” he added.

Although it’s unclear the extent to which economic growth or new power needs alone will drive demand for wind energy in the west, Hornung said wind energy still has an important role to play. “We need to position ourselves as a solution provider that can help western Canada address other challenges, too, and one of those challenges is climate change.”

A recent poll released found that more than half the population in Canada would like to see a national climate policy instituted at the federal level, and that the majority of Canadians support carbon pricing programs. As one panelist at the CanWEA Forum pointed out, in March over 100,000 Canadians wrote into the National Energy Board calling for it to include “climate” as part of its infrastructure reviews.

Environment Canada also recently released its new emissions inventory for Canada and what it showed was that for eastern provinces (including Ontario and Quebec), greenhouse gas emissions were lower in 2013 than in 1990. “That represents progress,” said Hornung, but the same can’t be said for the west. By 2013, emissions were higher in BC, Alberta, and Saskatchewan.

“Clean and renewable wind energy can help reduce fossil fuel use in the electricity sector and can also reduce greenhouse gas emissions in other sectors through the electrification of transportation, space heating, and some industrial processes,” he said. “There’s no doubt wind energy has a critical role to play in facilitating Western Canada’s transition to a low-carbon economy—and we’re prepared to help make that happen.”