Editor’s note: We post this because it should give planner pause to consider what the loss of these plants might mean if we have another cold winter. They have not entirely been replaced and few new wind farms are scheduled for commissioning before winter. The article comes from SNL Energy. 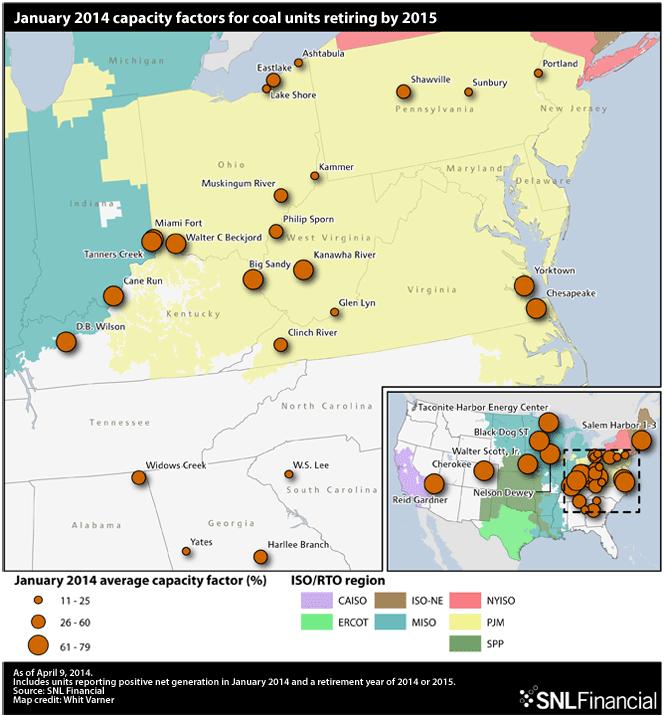 Coal fired plants in these locations are scheduled for retirement in 2014.

Even with their retirement looming, a cold January — particularly across the coal-heavy Midwest, Mid-Atlantic and Southeast regions — prompted an increased reliance on units slated to retire by the end of 2015, according to an analysis by SNL Energy.

A full 81% of coal-fired capacity slated to be retired by the end of 2015 produced positive net generation in January, according to the analysis, lining up closely with American Electric Power Co. Inc. CEO Nicholas Akin’s statementin January that 89% of the AEP coal fleet scheduled for retirement by mid-2015 was required to run during the winter.

While the National Oceanic and Atmospheric Administration reported overall average temperatures for the contiguous United States just 0.1 F-degree below the 20th-century average in January, power demand prompted by cold temperatures across the East resulted in an increase use of the coal plants set to be retired. The cold weather, caused at least in part by a polar vortex, also boosted demand for natural gas to heat homes, increasing prices in many areas and shifting economics further in favor of the coal fleet.

According to NOAA, below-average temperatures “dominated” areas east of the Rockies, particularly the coal-heavy Midwest, Mid-Atlantic and Southeast regions. The Northeast was 4.1 F-degrees cooler than normal, the Midwest average as much as 5 to 10° below normal for three of the weeks in the month, and was “exceptionally cold” across much of the Southeast with monthly temperatures 3 to 5 F-degrees below average in many states. 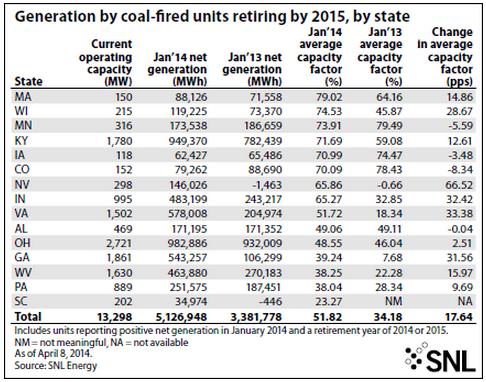 Still, 26 coal-fired units that comprise 2,903 MW of coal-fired capacity scheduled to retire by year-end 2015 reported zero or negative net generation during the month. About 50% of the retiring capacity that did not dispatch in January was located in PJM Interconnection LLC.

PJM had the largest share of generating coal-fired capacity scheduled for retirement before 2016, with 64%, or 8,537 MW. The average capacity factor for those units was 50.83%, an increase of 17.74 percentage points over the 33.10% average capacity factor for those same units in January 2013.
The RTO reported that nearly 20% of its total generation capacity experienced forced outages during the polar vortex in early January. Natural gas pipeline constraints contributed to up to a third of those outages, leading market participants to question future reliability during cold snaps, when much of the retiring coal capacity is being replaced with gas-fired facilities. In an April 3 interview, Akins declared the EPA should take care to consider reliability when it releases greenhouse gas standards for existing power plants in June.

However, ISO-New England is a notoriously constrained region for gas pipelines. Despite the skyrocketing power prices during the January cold snaps, intraday 2 scheduled deliveries to gas plants within the region fell as deliveries to gas LDCs reached a four-year peak.