A company with roots in aerospace has formulated a material and shaped it to provide vortex generation and leading edge protection in one package. Edgewind’s tough proprietary material, just 0.014-in. thick, sports a serrated edge for the vortex generator. Recent tests by the U.S. National Renewable Energy Laboratory revealed that when coupled with an elastomeric tab on the blade’s trailing edge, the turbine’s performance improved 22%. Looking down a CART2 blade shows the serrations at the edge of the CVG tape. 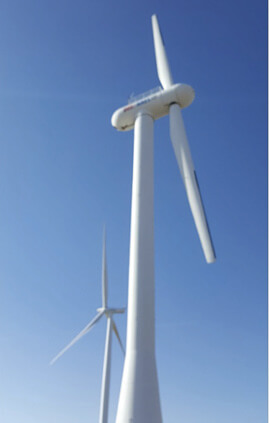 NREL’s CART2 turbine provided a test stand for Edgewind’s CVGs and Tabs. The CVGs are just visible about mid-length to the blade tip.

The company’s business plan is also a bit different in that rather than sell the devices, it proposes to share the additional revenue from the increased power outputs. Although company finance director Richard George would not share the percentage figure.

Most vortex generators (VGs) appear as small tabs fastened perpendicular to a blade surface. Reports are that these “conventional” VGs improve production at best 2.5%, which is a significant figure. “The conformal vortex generator, or CVG, and tab offers the potential for operators to significantly increase their wind farm production and ROI without adding additional turbines or capital investment,” said Edgewind’s CTO Peter Ireland.

He said that installation is accomplished quickly by rope or aerial lift. The work needs minimal surface prep, a visual alignment, and no special tools. Also, an easy removal facilitates section repairs or replacement. Edgewind has worked with NREL to collect data over an 11-month period on the performance of the CVG and Tab relative to industry standard edge protection tape on the Lab’s 600 kW CART 2 wind turbine in Golden, Colorado.

The CART2 blades, a zero twist, high-speed design, do not represent a current commercial turbine blade design. However, its general power curve does have a shape similar to commercial MW-scale turbines. Tests collected five-minute average power and wind-speed data, which was filtered to remove noise from unstable wind. Data for the baseline was limited at wind speeds over 15 m/s. Data for the CVG + Tab arrangement is still being collected.

More on the plus side: Ireland says that NREL reported a 122.2% increase in kWh production from the CVG and the Tab relative to a conventional leading-edge-taped blade. This shifts the power curve between the cut-in and full production wind speeds. An increased area under the curve indicates increased power production. The plots show how the CART2 turbine performed with three arrangements of the CVG and Tab.

The Tab has a square cross-section and could be adjusted several ways. But, says Ireland, adjustments depends on the geometry of the blades on which it will be used.

The company is looking for field trial sites in the U.S. and Europe to collect enough data to validate a CFD model, which will allow optimizing the design for each brand of turbine.

Furthermore, a wind farm ideal for additional tests would have about a 20-MW capacity or more in a prime wind generation location with stable, low-turbulent wind patterns. Sites should have General Electric, Vestas, or Siemens Gamesa turbines.

Site owners should have their own O&M staff that will be responsible for installing the CVG and Tab on two to three of their turbines. Edgewind will provide the CVG and Tab materials, installation training, and the LIDAR equipment required to measure wind speeds during the period of testing. Site owners will keep all additional power generated profits during the field trial. 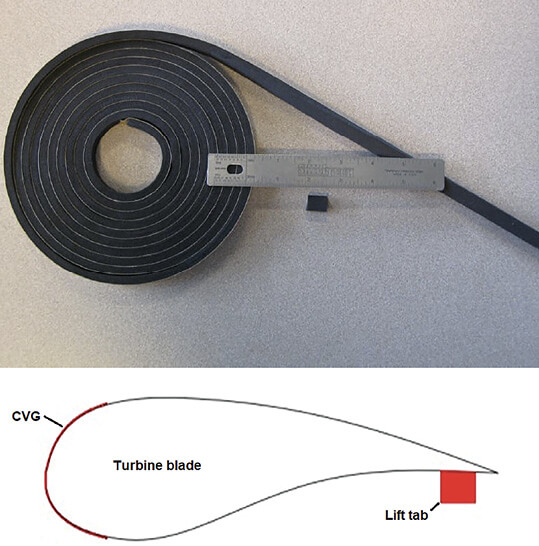 The Tab, part of the Edgewind offering, has a nearly square cross section, a shape that might be optimized for each blade.

The field trials will assist in optimizing the CVG and Tab for different wind turbine models. Based on Edgewind’s experience from an aircraft tests, the company expects that specific optimizations for turbine models will yield additional increases in power.