Cold weather presents special problems for wind turbines. Inside the nacelle, low-viscosity lubricants keep the gearbox turning and enclosure seals to keep moisture and ice off electronic components. But outside the nacelle, things are different. Ice easily forms on turbine blades possibly adding hundreds of kilograms, which degrades performance and shortens working life. About 65% of wind turbines in North America are in areas where icing is possible and likely. Also because wind farms are often in remote locations, shutdowns are occasionally necessary when icing conditions are present. Then, turbines require a visual inspection before a restart.

The problem with ice on a working turbine is that it can be thrown, and when not, it causes additional drive-train loads often in excess of design loads. For this reason, many turbines are shut down when ice buildup threatens and restarts come only after an inspection confirms the ice is gone. This is a difficult practice in remote locations or at night.

Ice on turbine blades is fairly obvious when the unit is clearly visible. But at night or in remote locations, the question of ice on blades becomes a matter of conjecture. Weather conditions right for ice is one indicator, but there are better ways to detect it and protect turbines.

Traditional ice detection uses meteorological equipment but this does not detect ice on blades. It simply measures conditions for icing, so it does not give operators enough warning or time to take action – such as shutting down the turbine to prevent damage.

Detecting ice
A recent solution to the problem of blade icing includes ice-detection sensors and controls. The unit is part of a rotor monitoring concept, called RMS, for wind turbines. It lets operators monitor wind-turbine performance to detect ice on blades and avoid damage. RMS uses optical strain sensors mounted inside at the root of each blade. They work optically so the sensors are immune to lightning and electromagnetic induction effects.

The ice detection system provides information for the operator to shut down the turbine when ice loads exceed the specs or present a danger of throwing ice. The system also detects when ice has been shed.

The ice-detection system works two ways. The left of Signals from ice shows the system working under normal operation conditions. The monitoring system measures the bending moment of the blade as it rotates, generating a sinusoidal wave pattern. As ice builds on the blade, the amplitude changes. When the trace goes above a predetermined threshold, the monitoring system shuts the turbine down.

The right side of Signals from ice shows a static signal trace. At this time, the turbine is closed down but not stopped. The rotor is still turning slowly while the system is working in the frequency domain. It is relying on the low wind speed, about 3 m/s, to excite the natural frequency of the blade. This natural frequency changes as ice builds on the blade and changes its mass.

The photos and traces show how ice looks to a technician and the detection system.

The buildup of ice correlates with stored data. The right of Reading the graph tracks a period from October to December. At the test site, there was no ice buildup for the first 70 days. At about day 72, moderate ice was verified. On day 78, a significant amount of ice was noted. After that, there is a reduction in mass to the point where it was safe to restart the turbine.

Now consider two turbines, A and B, on the same wind farm. The red and blue traces show strong correlation. Notice the apparent noise signal level indicating about a 100 to 150 kg addition to one blade. This is significantly reduced by providing blade pitch information. The ellipses identify two severe ice events detected by the system and confirmed by inspection. Without ice, mass values should be zero. In this case, both turbines have inherent noise of 100 to 150 kg because pitch angle feeds were not provided. Overall system accuracy is maximized by supplying a pitch and angle feed from the turbine controls, along with blade mass and center of gravity.

Experience shows that to increase the overall accuracy of the ice detection system, blade pitch position from the turbine’s control system is combined with the optical data.

So if we can take blade-pitch information on the turbine, we can reduce the noise level. Even without it, we can clearly see that both turbines correlate well with each other – they are both icing at about the same rate. At 40 days, turbine A had ice for about half the time of turbine B. This tells that the operator was able to start Turbine A before B by two days. This, of course, improves the revenue for that particular machine. 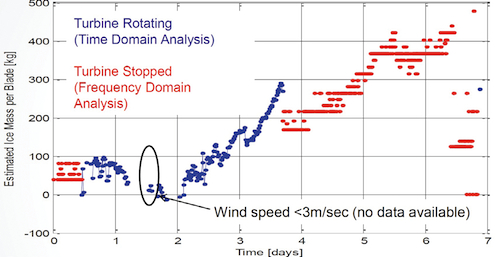 When the RMS is functioning on a working turbine, it can generate the blue traces. When signal top a predefined threshold, the controls halt the turbine, but the RMS continues to track ice build up through the frequency domain, the red plots.

Data in Time domain and frequency analysis presents a comparison between a turbine rotating (blue trace) and one stopped (red data). Notice that the turbine on Day 2 is working without ice, but slowing over a period of 1 to 1.5 days. The blue curve is going up indicating ice build up on the blade.

At some point, the selected threshold is exceeded and the turbines will be stopped. The red information indicates that Turbine A is halted, but the system still provides useful data. The mass still increases on the blade, up for two more days, but then the data becomes flat again. After about day six, it reverts to zero. So the system works when the turbine is operating, but it is just as useful when it is not.

A closer look
The rotor monitor includes several components. First, there are four independent sensors at the root of each blade. These are installed at four positions corresponding to the leading edge, trailing edge, pressure surface, and suction surface. The sensors that connect to the interrogator unit, are rugged, well protected, and will last the life of the blade. The interrogator unit (OEM1030), mounts in the hub of the turbine. It can also mount in the root of the blade, but anywhere in the rotating part of the turbine would do.

There are several ways to transmit data out of the hub. One is a GRPS modem, which lets operators send data to the U.K. for analysis. Another way is to send the data by slip ring into the nacelle where it could be connected to the SCADA system for direct control of the turbine. So as the ice builds to a certain level, the SCADA can call for a shutdown and restart when the ice clears. The RMS from Moog includes four optical strain gages in each blade, an interrogator unit in the hub, and at least one of two ways for transmitting signals across the turning hub.

The other main feature of the system is part of the RMS. Using the same system and additional software supplied by Moog, the system can interrogate the data and deduce information associated with blade damage and rotor imbalance. This can reduce the unit’s overall payback period.

Ice detection can be implemented on any wind turbine. It has been globally installed in many and we have not yet received word of any sensor failure. From experience, the system annually provides about $15,000 in additional revenue. In September 2009, GL certified the system.