The next generation gearbox must show great improvements over the last and then be manufacturable around the globe. This article introduces one such design.

The next generation of drivetrains will be large and operate in harsher environments (offshore) than those previous. They will have to be more reliable, easier to service, repair, monitor, and include effective diagnostics and prognostics. These Gen2 units will have to carry greater torque and rotor-bending moments, and show drivetrain dynamics with lower frequencies, for more durable machinery. Operational costs and financial risk must also come down. The need for improved reliability has driven several efforts in the industry, including:

• Stricter gearbox requirements in the 2010 edition of the Germanischer Lloyd “Guideline for Certification of Wind Turbines”, and

• Current revision efforts to AGMA 6006-A03, “Design and Specification for Wind Turbine Gearboxes”

Engineering firms have been developing and improving design methods and software since the beginning of the wind industry. Manufacturers have been improving their product by implementing a range of tests such as full load end-of-line testing, off-axis load and dynamic development testing, 100% nital etching, stricter incoming material specifications and inspections, and improved techniques for the heat treatment of large components. Turbine designers have a better understanding of the loads and dynamics in the machinery. An easily changed high speed cartridge is designed for a proposed 5-MW gearbox. A recent condition-monitoring product, Romax IDS, can detect wear early enough to allow, if necessary, a planned and orderly replacement.

Rotating machinery specialists such as Romax Technology have been involved in these activities along with the development of the next generation of wind-turbine gearboxes. To date the company has developed 14 multi-MW models ranging from 1.5 to 5.5 MW, which are used by 10 different turbine manufacturers, most of which are installing turbines in the Far East. “We won’t design a gearbox for a manufacturer unless they go through certification either by GL, DNV, TUV or an equivalent,” says Romax Director of renewables Andy Poon. “This along with our own due diligence on the prototype development and manufacturing helps ensure high-quality manufacturing for our products.”

The company is working on improving the installation and serviceability of the high-speed stage of the gearbox. This stage in any wind-turbine gearbox is most susceptible to wear and premature failure, given the high number of cycles and high inertia of roller bearings in larger gearboxes. The company is also developing a diagnostics capability for damage and wear in the gearbox, with condition monitoring equipment and specialized software. If wear in the high-speed stage is detected early enough, then an up-tower replaceable cartridge can be easily fitted by a technician. The high-speed cartridge is easy to assemble. The technician simply removes the whole unit and replaces the high-speed-stage bearings and pinion in the new cartridge. Bearing preload is preset in the factory to ensure good performance. Double helical gears are used in several models on the parallel stages in combination with the high-speed cartridge. This negates the requirement of the axial constraint to resist the load due to gear helix. Then the high-speed bearings need only react to radial loads. It eliminates the problem of double row, taper-roller bearings being unloaded in reverse torque situations.

Another recent significant development is a new way of adapting the high-speed bearing to many common gearboxes in service. The concept of this new design was developed after evaluating many offshore machines. Most bearings are manufactured with high quality material, to high tolerances and surface finishes, and then fitted with no real idea of the actual preload,” says comapny Test Team Leader Richard Smith. “Industry falls down on the last 10% of the job. A new approach to retrofitting the high-speed stage takes aim at setting accurate bearing preload, which results in longer bearing life than the previous practice.” The analysis is of a RomaxWind model of an NREL GRC drivetrain with a 750-kW gearbox. RomaxWind was released as a wind turbine specific version of the RomaxDesigner; software used by the automotive OEM’s for geared transmission design and refinement.

Another feature of the recent gearbox is a split-torque design with rotating ring gears and a dry sump. This removes a common problem of debris accumulating in the 6 o’clock position of the stationary ring gear and the early failure of this gearing. Gravity feeds oil into a sump below the gearbox, so the gear stages need retain no oil. Churning is minimized so less aerated oil returns to the cooling system and drag losses drop.

A Romax 1.65 MW gearbox is assembled at CRS-QYS in Changzhou China.

In addition, the company has an advantage because it has been a long-time developer of commercial engineering software for designing gearboxes as well as being a large gearbox design firm. Gears and bearings are designed with microgeometry, and clearance and preload settings after accounting for whole system structural deflections, non-torque loading at the rotor, and the effect of thermal expansions and off-nominal tolerances.

Romax software shows strong validation with extensive gearbox measurement data provided by the NREL GRC, and the software is certified by Germanischer Lloyd for gear contact analysis and rating. The analysis allows for improving function, performance, weight, and cost of gear trains.

The planet carrier provides an example of lessons learned. Generally, manufacturers use cast-steel carriers to meet strength requirements. However the steel has high scrap rate, can be a difficult to work with, and has stringent requirements for nondestructive testing.

Careful analysis has led the company to a suitable lower cost and lower weight (sometime by 1,000 lbs) cast-iron planet carrier. “We worked with GL to approve GJS 400 spherodal graphite cast iron for the planet carrier,” says Design Team Leader Dave Saysell. “By careful analysis and rearrangement of the structure, we can achieve equivalent deflections, strength, and fatigue life with this lower-cost material. Critical attention is paid to strength near the planet-pin fit and the carrier wind-up.” Environmental considerations are important because the material is more suitable for warmer climates. WPE

A reliable gearbox must pass a number of tests, such as:

Prototype development tests require an extensive program to prove-out the quality of the design and manufacturing, and identify and improve issues. This includes tests required for certification as well as more a complex and thorough test program, such as with off-axis loads, dynamic conditions (e.g. start-up and shut-down) and accelerated fatigue testing. State-of-the-art manufacturers can perform these complex tests. In addition, prototype testing of the instrumentation is typically extensive.

Certification tests must meet requirements of the certifying body. For example, they should demonstrate that load sharing factors meet design assumptions, and show satisfactory function and wear in the gearbox. After a specified set of steady load tests, the gearbox will be disassembled for a thorough inspection.

End of line tests ensure that in mass production, the product is of consistent quality, with acceptable vibration levels, good gear-contact patches, and acceptable bearing temperatures.

Up tower tests, part of field testing, at a minimum monitor the gearbox for vibration, temperature, particle counts, oil pressure and flow, and oil quality.

A few key tests in prototype development are outlined in the table below.

To see that a product is performing to expectations, Romax develops test plans, designs the mechanical part of the test stand and gearbox fixtures, trouble shoots test-and-assembly issues, analyzes the test data, perform teardown inspections, and writes the certification reports. 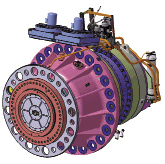 A CAD model of a Romax WT 2000 gearbox as it would be Installed in nacelle.

The Romax business model provides gearboxes that are design-to-own or design-to-license. This gives a gearbox OEM flexibility to develop and own technology, and provide it to the market, or license technology to a manufacture. The WT2000 gearbox is one example. So far, the product is licensed to six different manufacturers in China, Taiwan, Korea, and India and installed in many turbines across the regions. The gearboxes are installed in turbines licensed by Windtec to various turbine OEM’s. The product line includes ratios of 1:115, 108, 102, and 96 (50Hz regions) by changing the high-speed gearing. The gearbox has certification by GL and TUV Sud and the designs cover all wind classes (I, II and III) and all climates, including for example, an installation in Mongolia, where temperatures reach both extremes.

Designing one gearbox for production by six different companies brings challenges. Andy Poon: “Early on we set up a manufacturing team specializing in the audit and assessment of manufacturing facilities and we worked with the manufacturer to improve their production processes,” says Romax’s Andy Poon. “Our team has been all over the world and we recognize different levels of quality and capability – although in the Far East some of the best manufacturers we work with are on par with those in the West.”

The WT2000 uses an annulus design for the parallel stage housing as opposed to the common split housing. The design means there is no split through the bearing bores on the rear stages of the gearbox, preventing the common issue of bearing-race creep due to micro-movements along the split line under dynamic loading. Assembly of the high-speed cartridge allows for easy maintenance. The gearbox mounts directly to the hub by 24 rubber bushings for an integrated design that provide compliance and torque reaction from the planetary stage. Large double row, taper-roller bearings support the input shaft and protects the gearbox from off-axis loads by the high tilt stiffness.