If experiments confirm wind-tunnel data, the 20,000-pound dome could lead to larger and more efficient turbines.

Some have likened it to a UFO stuck atop a utility tower and others simply call it “big nose.” Granted, it’s not your usual wind turbine but GE, the engineers behind a unique new design, are more concerned about efficiency than aesthetics. The design started out with a styrofoam ball and a toothpick when GE scientists were challenged to build a rotor that could harvest more wind.

The result is a lone prototype that today rises some 137-plus meters (450-plus ft.) from base to blade tips, and stands out amongst a sea of conventional turbines in California’s Mojave Desert. It’s called the ecoROTR for Energy Capture Optimizer by Revolutionary Onboard Turbine Reshape. GE started testing the 20,000-pound domed ecoROTR in May of this year as part of the company’s ecomagination initiative, which aims to build cheaper machines with a lower environmental impact.

ecoROTR was designed with the intent of addressing two significant wind-turbine issues: efficiency and size. The dome’s operating theory goes like this: Wind hitting near the center of rotor is basically lost, or according to GE “wasted.” The team of GE scientists figured if they could deflect the wasted wind from the hub, the aerodynamic sections of blade could still harvest its power. The engineered “nose” or aluminum dome can also mount on larger rotors without further adjustments. 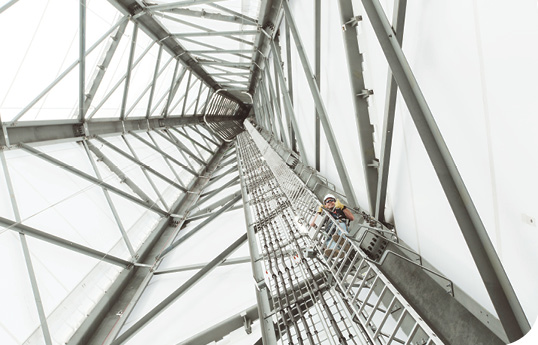 This GE engineer is heading up the ecoROTR’s 97-m space-frame tower, which is also a prototype. It holds one of GE’s most powerful machines, the 1.7-MW wind turbine, and the attached 18.3-m experimental dome.

Data from a wind tunnel test showed the potential for a 3% improvement in performance. This might not seem like much but GE maintains that improvement multiplies across an entire wind farm, enough so that they took a model turbine to the University of Stuttgart in Germany for more testing. This led to the desert prototype, a 18.3-m (60-ft.) experimental dome attached to the 100-m diameter rotor on a 1.7-MW GE wind turbine. Even the tower is a prototype.

Instead of traditional rolled steel sections, the 97-m (318-ft.) latticework or space-frame tower is wrapped in a polyester-weave coat. Before it is constructed, tower girders or support beams easily load into shipping containers and onto ordinary trucks. According to GE, the steel beams more easily bolt together in places that were previously hard to reach during tower construction.

It will take until the fall of this year before data is fully collected from the ecoROTR’s prototype. Until then, we’ll have to wait and see if a UFO-like aluminum dome could serve as the future model for wind turbines.