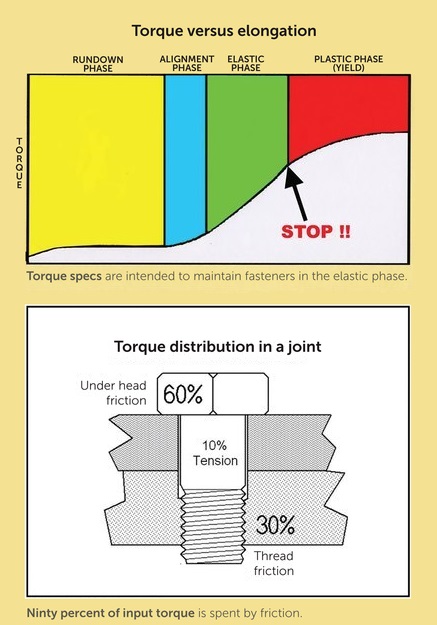 In theory, fastener torque is a simple concept. It’s a rotational or twisting force about an axis. In application, it’s much more complex with multiple variables that must be managed in order to produce a successful outcome. Torque is generally viewed as something that’s achieved rather than a means to an end. The truth is that when it applies to fasteners, torque is merely an indicator that one may have reached the objective which is a “clamping force”. Indicators such as “the gauge reached a specific pressure”, the digital display hit the magic number, or even “the torque wrench clicked” do not guarantee that a fastener is properly tensioned. Let’s take a look at some of the factors in play.

The key vehicle to achieving clamping force is the fastener. Considering the large size of many bolts in a wind turbine, it’s somewhat hard to imagine but they actually behave much like rubber bands. When tightened, fasteners stretch and the resulting tension holds components together. As you might guess, this is not something to be taken lightly in an enormous, rotating, vibrating, critical assembly with 600 or more of these “elastics”, so attention must be paid to a number of characteristics.

Fastener quality and things such as metallurgy, manufacturing, heat treat, and grade are important. Some turbine designs include stretching bolts near the point of failure which makes selection, quality, and condition even more critical. Fasteners are intended to maintain elasticity within a certain tension range. The illustration Torque versus elongation shows their relationship. However, if over-torqued into the plastic phase and permanently deformed, high levels of vibration experienced during turbine operation can cause them to fail. In addition, thread damage or corrosion increases friction, which is the most significant variable in any assembled joint.

Bolt tension is significantly reduced by contaminated threads or a lack of lubrication.

Most of the turning force applied to reach a specified torque is used to overcome friction. In fact, an incredible 90% of torque is absorbed by friction in the joint. The illustration Torque distribution shows where friction spends torque. With only 10% of input force actually used for tensioning a fastener, characteristics such as surface finish, thread quality and contamination must be carefully monitored. Additional friction caused by abnormalities such as galling or rust will inhibit proper tensioning and reduce clamping force which can lead to component failure. Even the order in which bolts on a flange are tightened can increase friction and degrade compression in the joint. Critical bolts should be sample tested, and a visual inspection performed before each use.

Another method of overcoming friction is by avoiding it completely. As with turbine base and some blade bolts, “tensioning”, i.e. elongating fasteners using a threaded hydraulic cylinder, eliminates the thread and shoulder-friction resistance at play when stretching bolts the conventional way. Once the bolt is tensioned to the specification, the nut can be spun down and seated with simple rundown force.

Measured torque can be applied in a variety of ways including: hand torque wrenches, gear-reduction multipliers, hydraulic wrenches, and electric multipliers. Critical factors include tool accuracy, repeatability, calibration, and proper use. Torque tools are considered instruments, and when used incorrectly can be unsafe and ineffective.

Hand torque wrenches are designed for tightening only. When used to break fasteners free, spikes in the force applied can exceed capacity and damage the tool. Extensions added to torque-wrench handles that change the effective length, increase the force applied and so must be accounted for.

In addition, simply dropping a torque tool can knock it out of calibration. Some wind energy companies require technicians to verify torque wrench accuracy on a daily basis because calibration cycles are typically 12 months apart. Electronic “torque checkers,” (See image next page), provide a level of confidence that tools have not been compromised. When considering larger and more complex torque tools, components such as gauges, connectors, and electronic controllers must be in proper working order. Even fluctuations in electricity can affect torque output.

Tooling presents opportunities and challenges. Traceability of applied torque in wind turbine fasteners has become of greater interest. Electronic tools that record data such as date, time, and actual reading have therefore become more prevalent. In addition, these instruments can easily switch from metric to standard units, digitally, and even measure angle of rotation, which is also a way to ensure that a required clamping force is applied.

A torque meter is used to verify the precision of torque tools and provide a level of confidence that the tools have not been compromised.

On the down side, the weight of hydraulic bolting tools has become a concern. With companies implementing a 50 lb or less max-lift-limit-per-person rule, an effort to reduce tooling size and weight has resulted in increased use of hand and electronic torque multipliers for things such as 10% flange-bolt checks. A tool substitution can reduce the weight by up to 50% or more.

Technicians who completes NC3 Training programs earn certificates to show they are certified in a particular subject matter, such as torque.

Considering the complexities associated with understanding and application of torque, proper training becomes another opportunity. Torque theory, joint dynamics, and fastener behavior are concepts that require extensive and thorough instruction to fully comprehend. In addition, correct use and maintenance of all tooling are other important pieces of the puzzle. To this end, quality training is often available through tooling professionals. Detailed theory combined with extensive hands on make up a complete torque training program.

An interesting concept put forth by the National Coalition of Certification Centers (NC3 – www.nc3.org) is that of widely accepted training standards along with industry accepted certifications, such as the example to the right. No matter which trade an individual might choose, a thorough comprehension of torque can be considered as necessary and useful.
When a prospective employee presents certification in a subject area, an employer can rest assured that the individual is proficient and knowledgeable to a known standard. With the broad skills gap that exists in the U.S., training standards (common is some industries such as automotive) go a long way toward developing a viable workforce. WPE