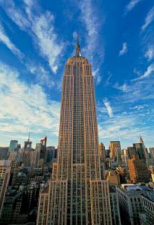 “It was a natural fit for us to combine 100% clean energy with our nearly completed, ground breaking energy efficiency retrofit work,” said Anthony E. Malkin, president of Malkin Holdings. “Clean energy and our nearly 40% reduced consumption of watts and BTUs gives us a competitive advantage in attracting the best credit tenants at the best rents. Our program of innovation at the Empire State Building shows simple, replicable, non-proprietary steps for other landlords to follow to be more energy efficient, cleaner and greener.”

The iconic landmark has signed a two-year contract with Green Mountain to purchase nearly 55 million kWh of renewable energy annually, which will avoid nearly 100 million pounds of carbon dioxide (CO2) emissions each year.  The purchase is also more than double the amount of renewable power that any other commercial customer in New York City is currently buying.

The renewable energy to supply the Empire State Building will be purchased in the form of wind Renewable Energy Certificates (RECs) from NRG Energy, Green Mountain’s parent company. Purchasing these RECs is a widely accepted way to address the greenhouse gas emissions of electricity consumption. Purchasing RECs in the same quantity as the Empire State Building‘s electricity consumption ensures that the amount of energy used by the building is added to the U.S. power grid from renewable sources and supports the further development of these projects.

The Empire State Building’s green power purchase further reinforces the building’s sustainability strategy. In July, the building unveiled a $2 million interactive, multi-media sustainability exhibit at the second floor visitor’s center, which showcases a $20 million energy retrofit project that was announced with President Bill Clinton and New York City Mayor Michael Bloomberg. The installation aims to educate the millions of people who visit the building every year on the positive global impact of both energy efficient building and sustainable living practices.