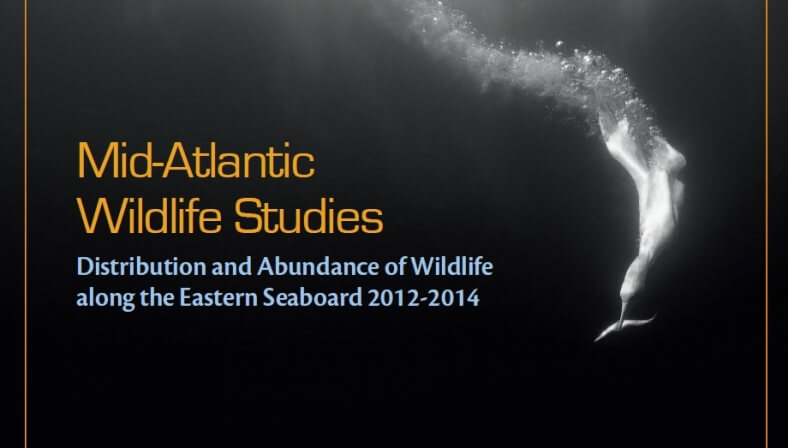 The study was conducted from 2012 to 2014 in Outer Continental Shelf waters off the Mid-Atlantic coast using new methods to monitor and analyze wildlife distribution patterns.

Editor’s Note: With funding from the Energy Department and several partners, a new study provides two years worth of data on the behavior of seabirds, marine life, and marine mammals. The intent of the wildlife research is to ensure more sustainable offshore wind development in the Mid-Atlantic. Here is more information from the Office of Energy Efficiency & Renewable Energy…

Thanks to a first-of-its-kind in-depth study of wildlife distribution and movements, the nation’s Eastern Seaboard is better prepared than ever for offshore wind energy. Funded by the Energy Department and several partners, the collaborative Mid-Atlantic Baseline Studies Project helps improve understanding of many birds and aquatic animals that live in the Mid-Atlantic and how they interact with their marine environment, promoting more sustainable offshore wind development.

Prepared by the Biodiversity Research Institute (BRI), the study provides two years of high-quality baseline data to wind energy regulators, developers, and other stakeholders, which BRI gathered through a mix of methods, including boat and aerial surveys—filling critical information gaps on species distribution and behavior of seabirds, marine mammals, sea turtles, and other species.

This extensive study covers more than 7,000 square miles of ocean waters along the Virginia, Maryland, and Delaware coastline where a number of offshore wind projects are moving forward.

Surveying the Mid-Atlantic
The study was conducted from 2012 to 2014 in Outer Continental Shelf waters off the Mid-Atlantic coast using several new technologies and methods to monitor and analyze wildlife distribution patterns. The results provide a new tool to help regulators, resource managers, researchers, and developers minimize issues during offshore wind siting and permitting processes, as well as informing natural resource management and conservation efforts.

Typically, boat-based surveys are used to monitor marine wildlife because boats can travel slowly enough to allow researchers to record detailed data on species of interest. This includes behavioral data, such as “feeding frenzies” of dolphins and seabirds preying on fish.

On the other hand, high-resolution digital video aerial surveys are a newer method for collecting data on marine animals. This study was the first to use this method on a broad scale in the United States. State-of-the-art video aerial surveys were conducted from small twin-engine planes at an altitude of 2,000 feet (ft), which is much higher than traditional visual aerial surveys flown at altitudes of roughly 200-600 ft. Flying at this higher altitude is safer for flight crews and less disruptive to the animals being counted. The aircraft had four belly-mounted cameras with a 200-meter-wide range of data collection.

Tracking techniques, such as attaching satellite transmitters to individual birds, also give researchers detailed information on the day-to-day movements and habitat use of wildlife. In this part of the study, the Energy Department contributed to two larger ongoing studies tracking marine birds, including red-throated loons, northern gannets, and surf scoters. Satellite telemetry was also used to study movements of peregrine falcons offshore.

Additionally, weather surveillance radar was used in the study to identify offshore wildlife migration pathways and timing. These radar systems can detect precipitation as well as the movements of birds, bats, and insects. Innovations developed during this study allowed for targeted exclusion of weather phenomena. This improved the sample size of available data and allowed for examination of migratory activity even during rainy and snowy nights. Finally, detectors on boats were used to record wildlife sounds at night to monitor animal activity offshore.

Mix of technologies
By using a wide range of technologies and methods, the study developed a more complete picture of wildlife populations in the Mid-Atlantic study region. Combining the unique strengths of boat-based and high resolution digital video aerial surveys alongside satellite-based tracking resulted in a more comprehensive understanding of wildlife patterns across the region. For example, survey data allowed for population-level analyses of abundance and distributions that were not possible with tracking alone. Similarly, satellite tracking provided data on broad-scale movements of individual birds, including nocturnal locations, which were missing from survey data.

This research builds on the Wind Program’s work to remove barriers to wind power deployment and increase public understanding of wind power technologies by addressing siting and environmental issues. As a model for future studies, the results will be used to make environmental management decisions by a variety of stakeholders, including government agencies, developers, environmental consultants, and nonprofits.

For more information on our research and development work in this subject area, see the Wind Program’s Environmental Impacts and Siting of Wind Projects page.