Placing wind turbines at greater hub heights puts them in stronger, steadier wind which improves their performance. Wind speed at just one more meter per second can pay off big. Turbine performance becomes a critical consideration as units with larger rotors and greater power outputs enter the market. Taller conventional steel towers, however, are too heavy and too large to transport and erect easily. To make conventional towers more impractical are conventional foundations. They take a lot of prep work and concrete. A conventional steel tower bolts to the top of the concrete tower base. The Atlas CTB Concrete Tower Base raises turbines to 130 m and more for an increased power output.

One way around the challenges of tall towers is to start with a wide-diameter concrete base. The large diameter provides improved stability by spreading tower weight over a larger area, thereby avoiding large and deep (2 to 3m in some cases) concrete foundations.   An added benefit is the ground-level space available for ground-mounted electrical and other turbine support equipment. Tindall Corp., a manufacturer of precast concrete, has given the concrete-tower base some thought. “The final design of the Atlas CTB (Concrete Tower Base) has features that will optimize existing steel-tower technology and place the focus on height,” says Tindall spokesman for Atlas, Chris Palumbo. “For instance, the Atlas CTB’s large-diameter base uses a shallow-ring foundation that can reduce material by 60 to 70%.  Initially, precast concrete sections are positioned against each other to form a cone shaped bottom section that provides the stability necessary to extend hub heights above 100 meters. The 50-ton, 26-m long sections transport by truck or rail. 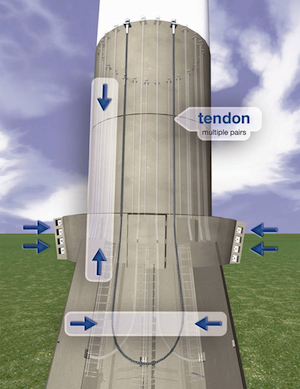 Vertical and circumferential post tensioning places the transition zone (top of the cone) in a state of biaxial compression.

After assembling the tapered base, a circular concrete section fits like a collar atop the base. All concrete sections are held together with post-tensioning tendons that loop through the circular sections and around an arched shelf of each taper section. Once the tendons are properly tensioned, the entire structure performs as a unit. A conventional steel tower then bolts to the top of the 31-m tall concrete base. Palumbo says hub heights to 130 m and higher are possible for utility scale turbines.

The final tower has a foundation of about 18-m diameter and one-meter thick. Germanischer Lloyd recently issued a certification report for the Atlas CTB. Palumbo says the company plans to have a prototype installed at Tindall’s Atlanta, Georgia manufacturing facility by summer. Watch an animated construction of an Atlas CTB at: tinyurl.com/atlasctb.