A $98 million facility capable of accelerated testing of turbine drivetrains of up to 15 MW will soon open its doors on what used to be a U.S. Navy shipyard in North Charleston, S.C. The first test bay, and the first to open will be capable of handling drivetrains up to 7.5 MW. Located on the east coast, the facility expects to become a regional hub for testing wind turbines destined for anywhere in the world.

The 7.5 MW test rig includes a static off-axis load applicator and will open this fall. A 100-ton capacity crane will load and unload equipment.

“The equipment will be the world’s most advanced, accredited-testing facility for the industry accessible by water, road, and rail,” said Jim Tuten, Project Manager, Clemson University. “It will provide real-world testing without a need to go out into the real world. The facility will have no rival in this highly competitive, global-wind industry.”

The test facility is right on time, too. The last 10 years have seen an increase in the demand for larger, more efficient, and reliable wind turbines. The Global Wind Energy Council projects worldwide wind industry growth to reach 537 GW by 2015, 1,000 GW by 2020, and 2,300 GW by 2030. If the predictions are correct, each new generation of turbines will be larger than the last. At least two 10-MW turbines are in concept development stages.

The U.S. Department of Energy (DOE) awarded the Clemson University Restoration Institute $45 million grant from the American Recovery and Reinvestment Act in late 2009 to build and operate a facility capable of full-scale, accelerated testing of next-generation wind turbines. The DOE’s objective is to reduce the cost of delivered energy. After receiving the grant, Clemson received an additional $53 million in public and private funds.

A 7.5 MW test rig with static, off-axis force applicator is scheduled for commissioning this Fall. Its testing area has a 100-ton capacity crane. The 15 MW dynamic off-axis force applicator test rig is scheduled for early 2013 and is served by a 125-ton crane. Both test rigs will be able to perform nacelle, drivetrain, or gearbox testing. Renk Labeco Test Systems is designing and manufacturing the two drivetrain test rigs. 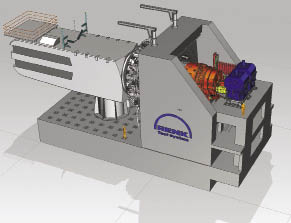 Equipped with a 125-ton crane, the 15-MW test rig features a dynamic off-axis force applicator. The unit is scheduled for completion in early 2013.

Clemson says a 15 MW Hardware-in-the-Loop (HIL) Grid Simulator Laboratory is also in the works. The simulator will test multi-megawatt equipment at full scale for grid-code compliance, to validate electrical models, advance smart-grid technology, examine energy storage and converters, and to integrate distributive resources more efficiently into the power system. Additionally, researchers will be able to investigate unique aspects of grid and cyber security, wireless sensors, high current calibration, and energy storage. The Simulated Grid will be one way to rigorously test wind turbines without exposing a transmission system to the hazard of transient events.

Clemson’s main goal for the facility to improve turbine reliability, efficiency, and reduce maintenance costs. The facility’s advisory board includes more than 90% of major wind-industry companies, who provided input to the facility’s design and function. WPE