This article, from Lloyd’s Register, is authored by Krishna Sivalingam, and reposted with permission. krishna.sivalingam@lr.org 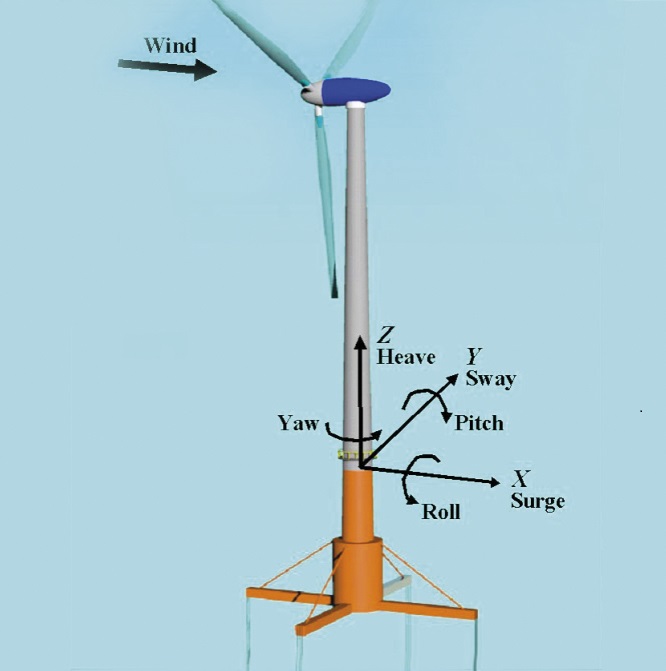 The illustration defines the six degrees of freedom for a Floating Offshore Wind Turbine.

Wind energy has been dubbed one of the Next Resources – as in what comes next after fossil fuels. Like the drilling industry, wind turbines were initially built on dry land then moved to the shallow coastal waters where there was a steady supply of wind and, in most cases, obtaining rights was easier than on land.

So far, the offshore wind industry has been using a fixed platform design for wind turbines where the base is embedded in the seabed. Many coastlines drop off steeply and as the water depth increases so does the cost of installation. Areas where the depth is greater than 100m haven’t been able to benefit from offshore wind energy. Walt Musial, a researcher at the U.S. Department of Energy’s National Renewable Energy Laboratory, estimates that there are more than 900 GW – almost the entire country’s’ installed power capacity – of offshore wind capacity along the Pacific coast of the U.S.3 The illustration shows the pitching effect (rotation about the Y axis) on a floating platform. Velocity contour is in the 2D plane. This is to study the FOWT rotorwake interactions and its impact on the FOWT rotor loading.

When the oil and gas industry needed to go deeper to get to oil, they transitioned from fixed to floating platforms. In 2009 Statoil, a company with years of floating oil and gas platform experience invested around NOK 400 million in the construction and pilot program for the first full-scale floating offshore wind turbine (FOWT)4. This prototype, called Hywind, has generated over 35 GWh since it started up. Yet, to date, there hasn’t been a floating turbine design that is as cost efficient as the fixed platform. The main challenge is in dealing with the movement of the FOWT generated by the waves and the wind. Anyone who recalls as a child, holding a pinwheel to the wind has experienced finding the sweet spot – the direction and angle of the wheel that gets it spinning fastest. But how is that optimum point maintained when there are six degrees of freedom in motion on a floating platform?

In Singapore, a group of researchers at the Lloyd’s Register Global Technology Center, and their partners at the Institute for High Performance Computing, are working to help bring about a tool that could help develop a cost competitive FOWT design. So far there is a significant amount of data gathered on fixed wind turbines. Tools such as the Fatigue, Aerodynamics, Structures and Turbulence (FAST) Code have provided a means to simulate loads and predict performance. The Blade Element Momentum (BEM) method is the basis for most of the wind turbine analysis software currently used in the market. However, its theory is based on the assumption that the rotor plane is normal to the wind direction. Taking a step in a new direction, these researchers are assessing FOWT characteristics by using higher-fidelity prediction models based on computational fluid dynamics (CFD) that can account for the six degrees of movement of the floating offshore wind turbine. The spirals are the blade-tip vortex and the colors describe the velocity field near the rotor.

The focus of the first phase is to assess the accuracies of different CFD methodologies in capturing the effect of rotor plane pitching motion due to platform pitching. They have performed a rotor aerodynamics performance assessment for the NREL 5 megawatt turbine – a model for which there is wealth of design and performance data available to the public. Using CFD tools, they have been 08 able to characterize some of the aerodynamic behaviors of FOWT. Specifically, calculating and comparing the induction factors from the CFD simulations to those same induction factors calculated, using mainly empirical data, using the traditional BEM based methods. The steady state calculations with CFD tools for thrust and torque over most of the blade compared very closely to the BEM predicted values.

In this initial phase, the study has proven that CFD methods are capable of handling rotor rotations together with rotor plane oscillations to predict the FOWT rotor aerodynamic performances. Furthermore the researchers have been able to identify the strengths and weaknesses of various CFD tools in evaluating FOWT systems. The team has received very favorable responses to their presentation at the ASME International conference on Ocean, Offshore and Arctic Engineering in June, 2014.

The next phase of the study will build on these findings to create a fully-coupled model for the FOWT. Once they have a model, design parameters such as blade pitch or platform weight can be iteratively changed and the resulting power output measured until the optimum design is found and then it can be validated by prototype testing. The cost of deploying fixed-bottom turbines is about $4 or $5 per megawatt-hour compared to $6 per megawatt-hour for floating systems.3 The ability to validate various designs using computer models will help accelerate the process of bringing a FOWT into the competitive market of energy production and then this next resource will be a viable resource for the deeper offshore sites.

For more from Lloyd’s Register:  www.lr.org/technologyinsight