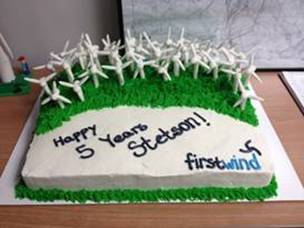 First Wind, an independent U.S.-based renewable energy company, recently celebrated the fifth anniversary of successful commercial operations of its 57 MW Stetson I Wind project.  Since it began commercial operations on January 23, 2009, the first phase of the Stetson Wind project has produced enough energy to power an average of 18,300 Maine homes annually over the last five years.

After a successful expansion in 2010, the Stetson Wind project today has a combined generating capacity of 83 MW and remains one of the largest operational utility-scale wind farms in New England.  Located in Maine’s Washington County, the two phases of the Stetson Wind project provide significant local revenue, including a total of $4 million in tax payments that will continue to be made to the surrounding communities for the next 20 years.

Below is a summary of some of the notable milestones achieved during the five years of successful commercial operations of the Stetson Wind project:

In addition to the 83 MW Stetson Wind I and II projects, First Wind has three other operational wind projects in Maine including the 42 MW Mars Hill Wind project in Aroostook County, the 60 MW Rollins Wind project in Penobscot County, and the 34 MW Bull Hill Wind project in Hancock County.  These five facilities have the capacity to generate 219 MW, enough to supply clean power for the equivalent of more than 95,000 households.