Editor’s note: This significant development from GE highlights again that natural gas power and wind-generated power are natural allies. With its ability to cycle, the J920 FleXtra gas turbine accommodates the variable nature of wind power. Together, the two will bring down the cost of power to one below gas alone. As more coal plants retire and as gas turbines such as these take over, the price of natural gas will rise above that of wind generated power alone. At this writing, natural gas is $4.71/million BTUs. At about $5, it is on a par with wind. “Our Jenbacher J920 FleXtra gas engines offer best-in-class electrical efficiency of 49% for 60 Hz. That adds up to big savings in fuel over the life cycle of any plant. For example, over 15 years, a U.S. facility could realize fuel savings of as much as $15 million for a 100-MW J920 FleXtra power plant with high simple-cycle efficiency and great flexibility,” said Lorraine Bolsinger, president and CEO for GE’s Distributed Power. “Bringing our latest large gas engine technology to the 60-Hz segment, lets us meet the growing needs of our customers worldwide with a flexible, efficient and quick-response solution.”

GE’s J920 FleXtra gas engine provides a capacity of 8.6 MW in the 60-Hz segment, with total efficiency of more than 90% for combined heat and power applications. This is attained due to advanced technological features such as two-stage turbocharging. This feature is what lets the J920 FleXtra attain up to 2% better electrical efficiency when compared to gas engines that only offer single-stage turbocharging, and it offers faster response to peaks in demand with excellent load-following capabilities.

Rapid start/stop cycles and operating flexibility, which can be gained by running multiple units in parallel, make J920 FleXtra gas engines the ideal solution for power generation and district heating as well as decentralized, independent power supply in remote, hot or high-altitude regions. They also are ideal for use in combined heat and power applications and for the stabilization of power grids. In addition, the J920 FleXtra helps enable the integration of renewables onto the grid and is well suited for regions with water constraints due to its lower water consumption.

“Globally, the installed capacity of non-dispatchable resources such as wind and solar has doubled since 2010 and is expected to increase further in the coming decade[1]. While wind and solar have clear environmental benefits, they must be supported by complementary generation to maintain a stable grid,” added Bolsinger. “Flexible resources like the J920 FleXtra can be activated during periods of low renewable power supply or during tariff spikes. Conversely, the J920 FleXtra can be quickly curtailed during spells of high feed in of renewable energy or low energy prices.” 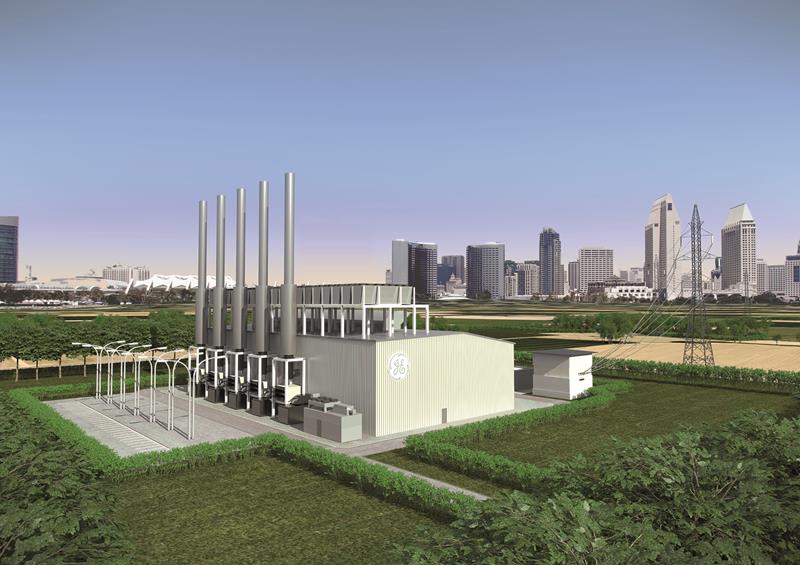 Due to the high levels of volatility in modern dispatch profiles, gas engines face additional challenges in regards to transient performance and grid code compliance. Peak demand and ancillary services require power plants with fast-load tracking capabilities without any trade-offs in plant efficiency or start-up reliability. The J920 FleXtra gas engine uses technology specifically to fulfill these demanding requirements. As a result, it is able to provide valuable grid services such as load following, automatic generation control, and supplemental reserve without impacting maintenance schedules or costs.

As an Ecomaginationqualified product within GE’s gas engines platform, the J920 FleXtra is among the world’s most flexible solutions for power generation. Ecomagination is GE’s commitment to build innovative answers to today’s environmental challenges while driving economic growth.  The J920 FleXtra for combined heat and power has extensive operational and environmental benefits. When compared with other gas engines in the same output range, GE’s J920 FleXtra can prevent the equivalent of about 1,500 tons of carbon dioxide emissions annually, and fuel savings of more than 6.4 million kWh of natural gas can be achieved per year. The J920 FleXtra increases efficiency while satisfying and exceeding environmental standards.

GE celebrated the official startup of the 50-Hz version of theJ920 FleXtra in April 2013along with a large-scale pilot program at the Stadtwerke Rosenheim municipal cogeneration plant in the city of Rosenheim, Germany. Gas engines form a critical piece of the municipality’s energy strategy. Given the fast-growing presence of renewable energy sources, it became necessary to establish a more flexible energy supply infrastructure. Because the J920 FleXtra can provide the same flexibility as smaller gas engines at a much higher electrical efficiency, it is always the first engine to dispatch for peaking power in Rosenheim.

In September 2013, GE announced that E.ON Hanse Wärme GmbH is planning to build northern Germany’s largest gas engine combined heat and power plant, which will include the 50-Hz J920 FleXtra. A wholly owned subsidiary of E.ON Hanse AG, the energy company is one of the largest regional heating providers in northern Germany. Construction of the new CHP plant began in March 2014.

The J920 FleXtra employs an innovative three-module concept based on proven core elements of the Jenbacher engine technology, which results in a top-quality, standardized generator set comprised of the engine itself, a generator and an auxiliary module produced at GE’s Jenbacher plant.

In February 2014, GE Power & Water launched its Distributed Power business, which is a leading provider of power equipment, engines and services, focused on power generation at or near the point of use. Distributed Power’s product portfolio includes GE’s aeroderivative gas turbines and Jenbacher and Waukesha gas engines, which generate 100 kilowatts to 100 MW of power for numerous industries globally. Headquartered in Cincinnati, Ohio, Distributed Power employs about 5,000 people around the world.