If not, you should. Developers of the Aeroscraft – a 300-foot-long, variable-buoyancy vehicle – say it will cut costs and time off a conventional wind project timeline in several ways. For instance, it will:

More about the aircraft below. 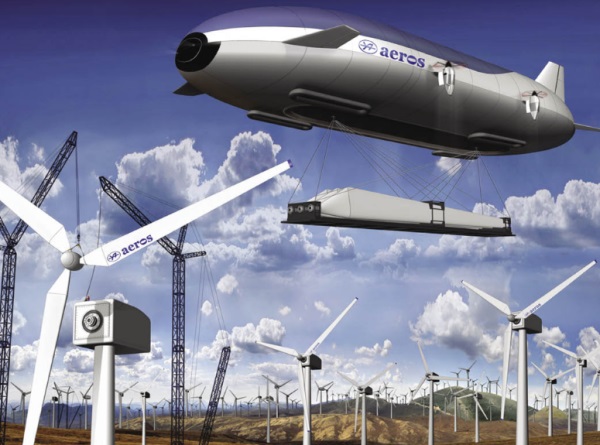 Not a blimp, zeppelin, or hybrid vehicle – the Aeroscraft is a new way to move wind turbines.

The transportation of windpower components from factory floor to project site is a primary challenge for the industry. It can only get worse as turbine components are built larger. Today, massive trucks and specialty rail cars haul components across the country under strict guidelines and over tricky routes that can include an inch of clearance here or a tight turn there.

A California-based company is aiming to eliminate the complications. For 25 years, Aeros (www.aeroscraft.com) has advanced conventional airships. It has now turned the page and started work on an entirely new technology called the Aeroscraft, which can transport large, heavy equipment to almost anywhere. The rigid, variable-buoyancy vehicle has the ability to off-load without re-ballasting. Its vertical takeoff and landing capability will help transport components from manufacturing site directly to point-of-need destinations, including those that are unprepared, hovering above uneven ground. A prototype Aeroscraft is under development in a California hanger. The actual aircraft will be almost twice as long and capable of carrying a 66-ton payload.

The company believes the aircraft could be used in many industries – tourism, humanitarian, oil and gas – but it maintains a special focus on windpower. Tim Kenny, the lead aeronautical engineer, says Aeros has been in talks with several wind companies across the globe. “It’d be used within a month if we had it today,” Kinny says. “The problem with wind turbines is they can’t build the blades big enough to maximize the performance. This vehicle will not only let turbine OEMs increase performance, but let them build wind farms in more remote destinations, and with a lighter environmental impact.”

Aeros is three years away from having a flight-ready Aeroscraft capable of carrying a 66-ton load. Later models will have greater weight capacities, such as a 250-ton model the company plans to build within the decade. The 66-ton model, however, will be able to carry three 300-foot-long turbine blades. They will be transported in a cradle, which would be lowered to the ground from a hovering Aeroscraft. Developers would then transport the tower and nacelle equipment in additional Aeroscraft transports.

The machine is capable of traveling 100 to 120 knots, for 3,800 nautical miles, and has an operational ceiling of up to 12,000 ft. After construction crews erect the turbine, the aircraft would return to pick up the empty cradles. This is a more efficient than ground transportation, Kinny says.

“This is going to move equipment at one-third the cost of traditional aircraft,” Kinny says. “And the logistics of it – taking it from the manufacture’s site in a direct shot to the wind farm, and reducing the costs and time of traveling, will save money because it moves them faster.”

The Aeroscraft is unlike any other blimp-like aircraft because it’s designed with COSH, or the control of static heaviness, an internal ballast system that lets the vehicle operate as heavier-than-air during ground operations or lighter-than-air during flights. It works like an inverted submarine, Kinny says.

A 254-foot-long prototype is housed in a giant California hanger. A gleaming silver vessel, Aeros has completed proof-of-design testing with the machine and met all the design targets set by partners at the Department of Defense, NASA, and DARPA. It first floated in January of this year. WPE