A conceptual rendering shows the multi-segment mobile platform applying a coating to an airfoil surface. Inventors Bruce and Keith Schlee say Helical Robotics can perform a variety of services on turbine blades.

Do you have an 18th century windmill? Then why use 18th century servicing? This is the thinking of Bruce and Keith Schlee who see putting workers in dangerous positions for servicing as an “old-fashioned” method. Instead, the brothers founded Helical Robotics LLC (helicalrobotics.com), which they say aims to minimize risk in the industry and increase profitability by servicing through robots.

The company boasts a type of mobile robotic platform that has the ability to conform to any solid surface and travel in any direction, including along sharp edges. Their primary focus is working on structures that are dangerous or difficult to access, such as bridges, pipelines, and wind turbines.

The patent-pending robot design consists of a series of repeatable and hinged segments using Mecanum wheels, those which can move in any direction. Pneumatic or hydraulic actuators work at the hinges, allowing motion on each joint. Hence, a chain of these segments can wrap around a tower like a retaining ring, clamping onto the surface. The clamping force is proportional to the actuator force, so the robot sticks to a tower thanks to wheel friction, and thereby overcomes the pull of gravity. Controlling wheel rotation allows moving the robot sideways, up, down, or rotate (clockwise or counter clock wise) on the work surface as needed 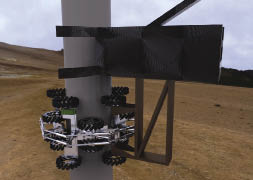 Helical Robotics can assist with wind-turbine servicing. A rendering of the First Generation robots suggests the multi-segment mobile platform could lift a structure up-tower.

Hence, the robot can navigate along a wind tower or airfoil for servicing. The inventors say the robot is capable of tasks including inspection (photo, video, x-ray, and ultrasonic), repair (painting and sanding), and cleaning. Also, payloads may be attached to the robot, for transportation up and down tower, regardless of height. A control system also allows full autonomous operation to ensure consistent results. Benefits to using such a robot include not needing a conventional crane for inspections, crane augmentation, and assistance.

The robot is also highly customizable, say its founders, and scalable to meet most lifting requirements. The basic architecture is the same, but sizing a robot depends on the application. Each model can be engineered to order depending on tower, payload, or work environment.

The robot made its first public appearance at the AWEA conference in May with great support. The company is currently working on a Second Generation prototype to carry payloads on cylindrical surfaces.