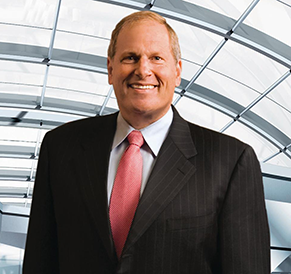 Cote was appointed by President Obama to serve on both the bipartisan National Commission on Fiscal Responsibility and Reform (commonly known as the Simpson-Bowles Commission) and the U.S.-India CEO Forum. He’s been a leading voice and Steering Committee member of the Campaign to Fix the Debt.

Chief Executive Magazine has named Honeywell Chairman and CEO Dave Cote “2013 CEO of the Year,” an honor that recognizes an outstanding corporate leader nominated and selected by peers. The award will be featured on the cover of Chief Executive Magazine‘s July issue and can also be found at ChiefExecutive.net.

The award recognizes the transformation of Honeywell under Cote’s leadership over the past decade. During that time, Honeywell  increased sales by 71% to $37.7 billion, pro forma EPS1 by 197% to $4.48, and delivered a total share-owner return of 240%, consistently outperforming the S&P 500 during that time.

Today, Honeywell is a global company, with 54% of sales coming from outside  U.S. versus 41% ten years ago. Since 2003, Honeywell has made more than 75 acquisitions and 50 divestitures, building great positions in good industries around the world.

“It’s a great honor to be recognized as Chief Executive’s CEO of the Year,” says Cote. “I’m proud of Honeywell’s performance and the terrific returns we’ve provided our shareowners. We’ve transformed Honeywell into a global growth company, led by common initiatives, behaviors, and processes.”

Nominations for CEO of the Year were garnered from Chief Executive Magazine’s 124,000 readers. The ten most frequently cited nominations were evaluated and a winner was voted upon by a peer Selection Committee consisting of CEOs from leading global corporations.

“Chief Executive Magazine is proud to recognize Dave as CEO of the Year,” said Bob Nardelli, Founder and CEO of XLR-8 and a member of the magazine’s selection committee. “He has led a remarkable transformation at Honeywell, executing on a vision and rebuilding trust and credibility over the past decade. Not only is Dave a respected leader in the business community, but he is also a leading voice for business in Washington.”