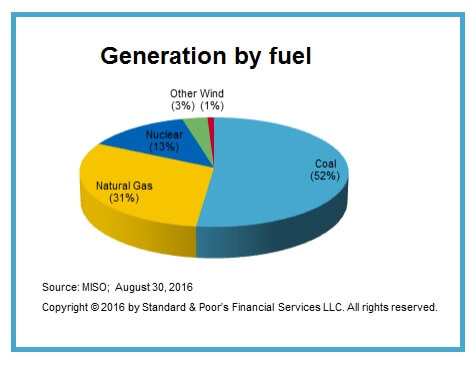 In tandem, in November 2016, MISO filed with the Federal Energy Regulatory Commission to permit a “forward-looking” capacity market auction, aimed to provide more generation stability in the MISO region. S&P Global Ratings anticipates that such changes could contribute to a reshaping of the region’s generating fleet, as independent system operator (ISO) states seek to transition from a coal-dominated fleet to incorporating more renewables and gas-fired generation.

However, whether or not MISO generators will be able to provide the level of reliability demanded in the region remains to be seen. Although the MISO region boasts a substantial reserve margin, closures announced for key coal and nuclear assets over the next two years may dissipate the cushion quite quickly – S&P Global Ratings anticipates generation shortfalls as soon as mid-2018.

• Renewables − Certainly, several of the states within the broad MISO footprint have adequate wind resources, and, with longer term visibility in both the ITC and PTC, we wouldn’t expect the roaring trend of renewable installations to subside in this part of the country any time soon.

• Coal to Gas Switching − Given the significant proportion contribution of coal to the MISO grid (only 23% of 2015 generation came from gas, against more than 40% nationwide–and against 50% coal-fired generation (this has fallen to less than 30% nationally [source: Utility Dive]), there’s considerable upside in coal to gas switching, and, indeed, the relatively ambitious goals within the region seem to rely on this happening en masse. With excess supplies being pushed out of the Marcellus and Utica shales, there should be no shortage of gas to satisfy the conversion needs. This is already underway. But there’s still a potential hurdle. The Midwest does not yet have the requisite pipeline infrastructure to accommodate mass coal to gas switching. This aspect of developing new gas assets can be time consuming and may make this less likely as an early compliance tool.

• Energy Efficiency − We expect demand reduction to be a key strategy throughout the country, especially in unregulated markets, where this can be vital to keeping compliance costs low. In the MISO footprint, this could be especially resonant–the recent capacity market auction (2016-2017) evidenced considerable decreases in demand that temporarily allayed concerns about supply shortages. Additionally, we note that certain of the MISO states already have strategies that emphasize lower demand growth.

• Operational Improvements − We generally think this will be one of the lesser used building blocks for CPP compliance, though it’s probably more likely to be used in MISO than elsewhere. MISO is likely more exposed to reliability issues during CPP compliance given its high proportion of coal and nuclear closures already scheduled. Consequently, if no state effort is made to sustain Palisades, Clinton, or other at-risk nuclear assets due to their challenging economics, we might expect certain coal assets to remain in the stack to provide grid stability and reliability. To the extent that gains in efficiency can be affordable and provide some mild uplift in dispatch (due to lower heat rates), this could be a strategy that improves emissions around the margins; however, the text of the CPP cautions against a ‘kickback effect’. That is, if these coal plants become more efficient to reduce carbon emissions, they may also become more economical and run more frequently, thus offsetting the benefit. Similarly, we could see a move towards less carbon intensive coal types.

• Transmission buildout − This is a bit nuanced. In certain parts of the country, specifically in the western U.S., we expect continued transmission building. Many of the western states have already pursued significant coal to gas switching, so their efforts are refocused on renewables–requiring significant transmission building, both to transport the energy as well as to mitigate reliability risk with these assets. Ostensibly, MISO states, which have steep goals and more limited ability to meet them through coal to gas switching, could transact with states in so-called over compliance. There is a risk inherent in this approach, and it’s being laid bare now–the process of litigating against the CPP is time-consuming, as is transmission planning, so we question whether or not MISO can truly rely on this strategy and still meet its goals in a timely fashion.