Achieving a 36% share of renewable energy in the global energy mix by 2030 would increase global gross domestic product (GDP) by up to 1.1%, roughly $1.3 trillion, according to new analysis by the International Renewable Energy Agency (IRENA). Renewable Energy Benefits: Measuring the Economics, released today at IRENA’s sixth Assembly, provides the first global estimate of the macroeconomic impacts of renewable energy deployment. Specifically, it outlines the benefits that would be achieved under the scenario of doubling the global share of renewable energy by 2030 from 2010 levels. 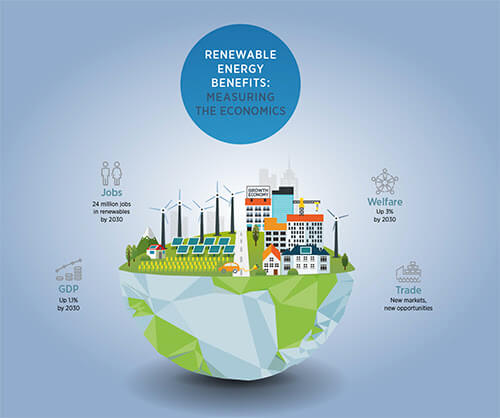 Achieving a 36% share of renewable energy in the global energy mix by 2030 would increase global gross domestic product (GDP) by up to 1.1%, roughly $1.3 trillion, according to new analysis by the International Renewable Energy Agency

Beyond finding that global GDP in 2030 would increase by up to $1.3 trillion – more than the combined economies of Chile, South Africa and Switzerland as of today – the report also analyses country-specific impact. Japan would see the largest positive GDP impact (2.3%) but Australia, Brazil, Germany, Mexico, South Africa and South Korea would also see growth of more than 1 per cent each.

According to the report, improvements in human welfare would go well beyond gains in GDP thanks to a range of social and environmental benefits. The impact of renewable energy deployment on welfare is estimated to be three to four times larger than its impact on GDP, with global welfare increasing as much as 3.7%. Employment in the renewable energy sector would also increase from 9.2 million global jobs today, to more than 24 million by 2030.

A transition towards greater shares of renewables in the global energy mix would also cause a shift in trade patterns, as it would more than halve global imports of coal and reduce oil and gas imports, benefiting large importers such as Japan, India, Korea and the European Union. Fossil fuel exporting countries would also benefit from a diversified economy.