Wind tunnel testing is commencing for the second phase of the leading edge erosion project, which is a collaboration between Texas A&M, UC Davis, and Sandia. During the 2012 fiscal year, Sandia, through its Blade Reliability Collaborative, partnered with a wind turbine operator and associated wind turbine manufacturer to study the effects of blade erosion on wind turbine power performance.  As part of its aerodynamics research, Sandia characterized the surface roughness caused by blade leading edge erosion, quantified the performance degradation caused by erosion, and developed models to predict the effects of the erosion on wind turbine energy capture. To achieve these aims, researchers used wind tunnel measurements and companion modeling efforts to develop a predictive model of roughness-induced boundary layer transition for wind energy applications. This first phase of measurement and modeling focused on an airfoil that is typically used on the tip region of a utility-scale wind turbine blade, the NACA 64-418, which has a thickness to chord ratio of 18%. The aerodynamic characteristics of the thicker airfoils located at the inboard region of a wind turbine blade are significantly different than the characteristics of thinner, outboard airfoils. There is a lack of critical experimental data of the effect of roughness and erosion on thicker airfoils, and collection of such data is needed to calibrate the model for application to the inboard region of a blade.  A second phase of this research is underway to measure the aerodynamic performance of an airfoil section model in a wind tunnel at conditions simulating those encountered by the inboard region of a wind turbine blade. The SERI S814 airfoil, which has a thickness to chord ratio of 24%, was selected for its desirable characteristics for code validation and the availability of previously published transition data. The wind tunnel model’s construction method, an innovative multi-part process  will enhance the ability to locate transition using infrared thermography. 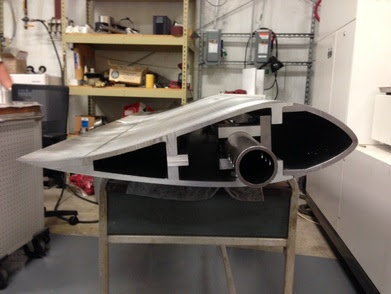 The model construction is complete (the last two pictures here), and the first wind tunnel test will be accomplished in December 2015. This is the finished surface of the airfoil model prior to mounting in the wind tunnel.