The wind energy market is undergoing a transition across the world. Feed-in tariffs are being replaced by auctions which are squeezing operating margins. The change is forcing asset owners to look at new ways of maximizing returns. While predictive maintenance, farm level optimization, vortex generators and a range of new options are on the table, there are simple low hanging fruits which often go unnoticed. A rigorous review of turbine data reveals simpler ways to prevent losses in energy and availability, which are often ignored. 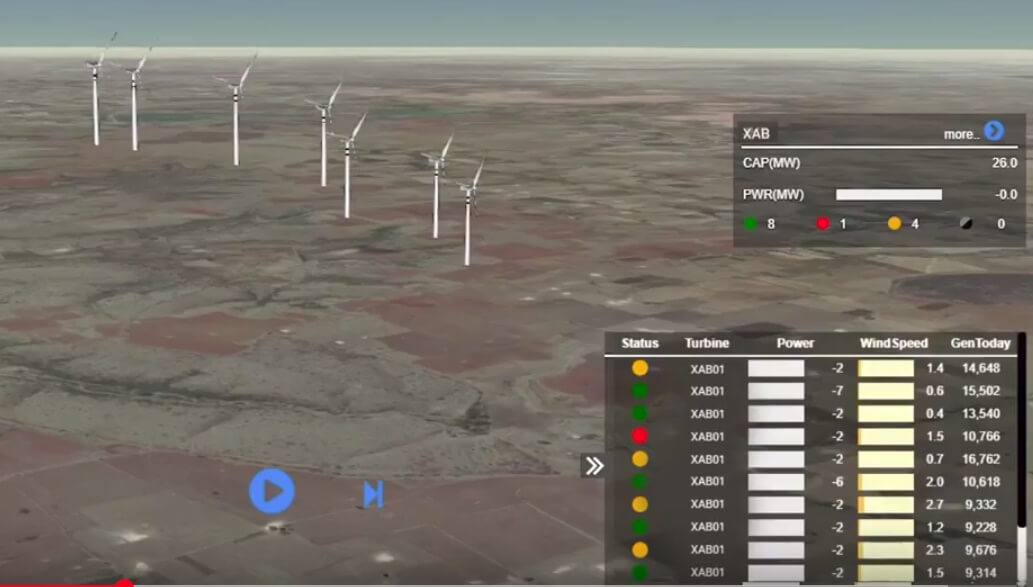 Data screens show the wind farm being monitored and details of each turbine. See the company video here: https://youtu.be/b0Sp8fqMk7Q

We at Algo Engines have worked with a diverse fleet of wind turbines covering OEMs such as Gamesa, Vestas, GE, Suzlon, and Enercon. Based on our experience across 4 GW of assets, we wanted to list some of the low hanging fruits in the battle for higher availability and enhanced production

Alarms raised by turbines usually result in a stoppage. However, many OEM systems allow alarms to auto reset, which will result in turbines restarting instantaneously. The resets fall under multiple categories – automatic resets, SCADA/Operator resets, remote resets and local/turbine reset. Many alarms allow up to three automatic resets, however, during an automatic reset the turbine will stop and start or pause. This stop-start or pause process usually takes between 5 to 15 minutes depending on the OEM. Who pays for the loss due to this restart?

Notice that we mentioned 3 automatic resets and this process could happen multiple times a day. A turbine in which these resets occur is often considered available as the reset is instantaneous. A study of the log will reveal that the turbine was down for less than a second as can be seen in the example below. However, it will take the turbine a while to move back into the generating mode, thereby affecting production

We identified cases in which the turbine did not generate for over 20 hours in a three month period due to one auto resettable alarm – drivetrain damping. We could also locate cases involving other alarms related to synchronization delay which caused the turbine to move into a stop-start or pause mode. This is a sizable loss in production which usually goes unnoticed. There may be no quick fix solution for this. However, the correct accounting of energy and time lost due to such alarms will help create a true picture of availability and losses.

A quick way to identify underperformance in a turbine is to compare the nacelle wind speed based power curve to that provided by the manufacturer. The underperforming turbine can then be assessed further. However, there can be a few complications in this approach. The OEM often comes back with a range of points including

The discussion on the above points is never ending and the nacelle transfer function methodology is still not easily accepted. We have seen some simple tests that can result in identifying performance issues using this method. A late start is one such case: We have noticed that even though the wind speed is above cut-in, the turbine does not start immediately for 10 to 30 minutes.

Understanding that the energy lost in such cases can be immense, we have created notifications like the late start notification. The notification is generated only when conditions such as turbine status is ok and the wind speed is above cut-in, are met. These notifications help our customers take up such matters with the O&M & OEM for further investigation. Timely action ensures higher generation from individual assets.

Most of the wind asset owners have contracts with O&M and for a resource, machine, or energy availability. As usual, contracts are never the same, with a range of exclusions and inclusions. Implementing these contracts effectively is critical to validate losses and damages. We note many clients are not convinced with the availability numbers provided by OEMs and there is constant need to update and change the numbers provided. Here are a few simple cases that we have worked with

All these instances resulted in higher asset availability. With our analysis, our customer raised the issue with the OEM, who made changes in availability calculations. An asset owner can manually analyze such instances by analyzing the SCADA logs, alarm data for one-off instances. However, as the asset capacity increases, this entire activity can become exhaustive.

Over the past few years, we have been able to help our customers identify such low hanging fruits to get an accurate picture of their turbine availability and performance. The goal of the platform has always been to bring the asset owner and OEM on the same footing. We aim to help our customer focus on critical aspects of plant performance and leave the data analysis to our platform.