Editor’s note: This article by Michael Goggin at AWEA provides its perspective to the recent Berkeley Lab and NREL report referenced below. These results confirm other recent analyses that found wind energy to be the most cost-effective way to cut carbon pollution. The report found around $7.5 billion in annual environmental benefits from reduced air emissions, 27 billion gallons in reduced water consumption annually, $1.3 billion to $4.9 billion in reduced consumer energy prices, and 200,000 American jobs and $20 billion in annual GDP from the renewable energy developed to meet state Renewable Portfolio Standards through the year 2013.

The following graphic from the report summarizes these benefits and impacts. http://www.aweablog.org/national-lab-report-wind-energy-win-win-win-for-consumers-environment-and-economy/

Wind cutting costs and pollution
The study’s results show wind energy is highly effective at reducing carbon pollution while also protecting ratepayers against fuel price increases, a critical message for states and utilities as they begin to craft plans to reduce emissions to comply with EPA’s Clean Power Plan.

Wind is particularly effective at displacing carbon pollution as most of the best wind resources are located in regions with the most carbon-intensive electricity mixes. Analysis by DOE and others has shown that wind provides the most bang-for-the-buck in emissions reductions and also protects consumers against fuel price spikes from an over-reliance on any one fuel source.

Consumers also benefit from lower energy prices, to the tune of 1.3 cents to 4.9 cents/kWh. Water savings and job creation impacts are additional to those amounts. For reference, in 2014 utilities paid an average of 2.3 cents per kWh for wind energy.

Policies to promote wind energy, most notably the 2.3 cents/kWh renewable Production Tax Credit and low-cost state RPS policies, also clearly provide net benefits to society because the environmental benefits of wind energy are much higher than any net cost of wind energy and those policies. It is widely appreciated that wind energy protects the environment by directly displacing the burning of fossil fuels at power plants.

The study confirms that wind energy also benefits consumers by keeping electricity and natural gas prices low and protecting against energy price spikes, as AWEA has noted in previous reports. Today’s study presents a conservative view of the environmental and consumer benefits of total U.S. wind energy, as it only examined the impacts of renewable energy developed to meet state Renewable Portfolio Standards (RPSs). Wind energy accounted for around 75% of RPS generation in 2013, and there has been a large amount of additional wind deployment in states that have exceeded their RPSs and in states without RPSs.

Specifically, the report examined the benefits of 98 million MWh of total renewable energy in 2013, while total U.S. wind generation in 2014 was nearly 181.7 million MWh. Had the study examined the total nationwide benefits of wind energy, as AWEA has done in its own calculations, the environmental benefits and likely the consumer savings would have been around twice as large.

Environmental, health benefits from wind spread to all regions
Importantly, these environmental benefits accrue to all regions of the country, as AWEA has also noted. The following maps from today’s study show that the renewable energy deployed due to state RPS policies reduced water consumption and provided millions of dollars in health and economic savings from reduced air pollution in all regions of the country. Notably, the air pollution map uses a conservative estimate of the cost of air pollution and only focuses on savings from renewable energy’s reduction of one air pollutant: particulate matter.

Water savings from wind helps states hit with severe drought
Wind energy and some other forms of renewable energy drastically reduce the large amount of water that is withdrawn and consumed at most conventional power plants. AWEA has previously noted the important role of wind energy in reducing water consumption in drought-parched California, calculations that are confirmed by the report. 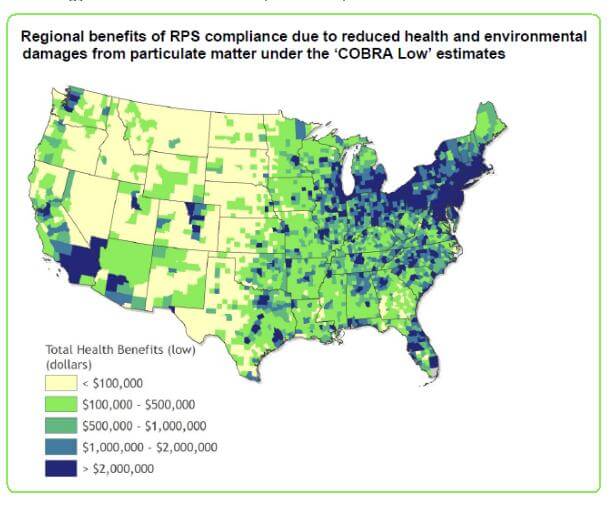 The map from the report shows that renewable energy is saving the most water in Western and Interior regions of the country that have been most severely affected by drought in recent years.

The map (above) from the report shows that renewable energy is saving the most water in Western and Interior regions of the country that have been most severely affected by drought in recent years. Not only does wind energy reduce water consumption, it also improves electric reliability by making our power system more resilient against climate change-induced drought and temperature increases that are expected to reduce the output of conventional power plants. Annual water consumption savings from RPS policies.