The advanced battery industry is growing at an extremely aggressive pace, with lithium ion (Li-ion) leading the charge. However, Li-ion is not the perfect battery; it has supply constraints, manufacturing cost reduction obstacles, and safety issues that leave it vulnerable to new chemistries that solve some or all of those problems. Research and development of new battery chemistries is fast developing and will soon have a major impact on the battery industry. 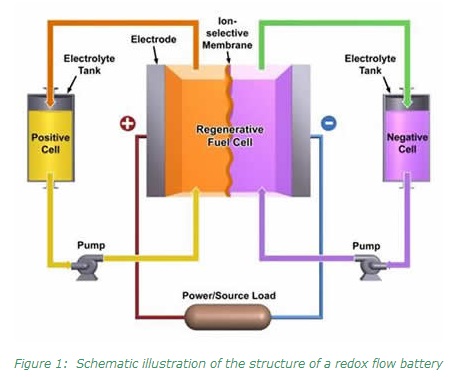 The study provides an analysis of the market issues and battery landscape associated with next-generation advanced batteries, such as vanadium flow batteries.

The emergence of these new battery chemistries is occurring in the context of an enormous increase in the world’s appetite for advanced energy storage devices. Although energy density has been the most sought-after goal for new chemistries – and most show improvements in energy density – it is not the only favorable quality for a next-generation battery. Cost and safety have become important concerns for most battery buyers. By offering cheaper price points, next-generation batteries can enable even more applications for batteries. In addition, some applications (e.g., electric vehicle and grid storage batteries) require higher safety standards and value inherently safe chemistries. Navigant Research forecasts that global next-generation advanced battery revenue will grow from $182.3 million in 2014 to $9.4 billion in 2023.

This Navigant Research report analyzes the global market for next-generation advanced batteries, with a focus on the current leading battery chemistry, Li-ion, and the energy storage device types that might eventually replace it: ultracapacitors and lithium sulfur, solid electrolyte, magnesium ion, next-generation flow, and metal-air batteries. The study provides an analysis of the market issues and battery landscape associated with next-generation advanced batteries. Global market forecasts for energy capacity, power capacity, and revenue, segmented by region, application, and chemistry, extend through 2023. The report also examines the key imminent and emerging technologies related to advanced batteries and provides in-depth profiles of the major industry players.