If conventional wind turbines are to break the 10-MW barrier and head to greater outputs, conventional designs will have to change. A small engineering firm in California offers several new ideas, one of which would put the heaviest component in the nacelle on a serious diet and slash costs. The company, it says, has the design for a speed increaser that combines cycloidal components and architecture with a planetary gear set concept. The result, called FrictionLess Gears, is said to provide a lighter-weight speed increaser (or speed reducer) than is possible with conventional gears alone and would be useful in most any sized turbine. A greater than 30% weight reduction is claimed for one aerospace application. A Nabtesco’s speed reducer shows some similarity to the FLG design offered by Kroupa’s firm. Watch a YouTube video of it here: https://goo.gl/7BM4fd.

Technical Director for the New Frontier Technical Group, Milan Kroupa, describes FrictionLess Gears (FLG) this way: They are based on the principle of a roller bearing thus offering low friction, high-torque density, and speed of operation. It can be considered a hybrid because it combines a planetary drive with a cycloidal drive. As in cycloids, the FLG’s shaft is eccentric but has no cycloidal disc or spur gears which some cycloidal reducers use. It operates on the same principles as a planetary unit yet engages a significantly greater number of ‘teeth’.

He adds that while planetary-gear units use spur gears for the annular, sun, and planets, the FLG does not. Nor does it use spur-tooth like profiles to mesh with a relatively massive cycloidal disc to advance it in a ‘pulsating’ manner. “FLG’s eccentric shaft smoothly rotates while light-weight rollers smoothly transition, via rolling motion, between the typically sinusoidal ‘teeth’ of the circumscribed ring gear. The smoothness of operation has some commonality with planetary devices but offers almost zero backlash on par with ultra-precise harmonic drives and gear sets which, unfortunately, can’t offer the torsional rigidity or loading and are therefore limited to high accuracy positioning applications” he said. FLG gears are also said to offer greater durability and reliability, providing lower noise, vibration, and harshness with longer life and greater safety factor, which are essential and important in aerospace applications. 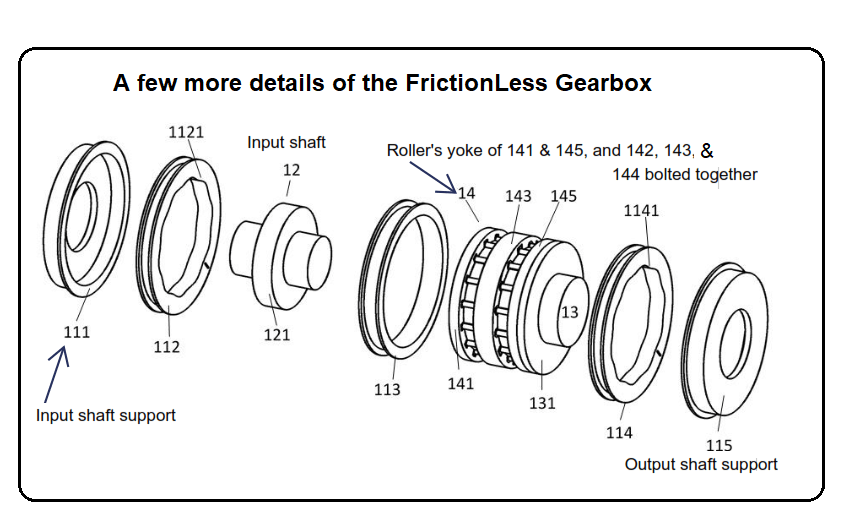 The illustration provides a limited look inside the FLG.

Because the eccentric shaft of the FLG can take many shapes, it makes possible gear ratios on the order of 500:1 “Various shapes of teeth and cams can provide interesting solutions which may not be possible with any other gear architectures or systems. Like planetary sets, the FLG architectures are back-drivable but can also be formulated to be non-reversing,” he said.

Kroupa adds that he has not done the calculations for a wind-turbine gearbox but he has a preliminary one on the V22 Osprey, the military’s tilt-rotor aircraft. He estimates that his design could take one-third of the current gearbox weight off the airframe, about 2,000 lb. “In wind turbines, the size and weight saving would proportionally affect the direct cost and could be significantly higher. This will vary on a case-to-case basis,” he said. For example, a 30-ton conventional wind-turbine gearbox might be reduced by 15 to 20 tons. Indirect costs related to structures such as the lower-weight towers and foundations will also be affected. Upgrading or retrofitting existing turbines is also a possibility. The illustration is of a FrictionLess Gear ‘roller bearing’.

One last tantalizing idea, says Kroupa, would be a simple continuously variable-speed FLG Transmission which can deal with gusts and other wind events. “Unlike most other CVT’s, the positively engaging, high torque, continuously variable transmission is not traction, chain, or belt design and therefore significantly superior. It could reduce stress damage to blades and bearings, thereby extending product life and lowering costs for service, maintenance, repairs, and ownership.

A variable-speed transmission would allow regulating speed fluctuations to keep it in the sweet spot for the power needed by the grid which in turn would allow lower cost generators, dispensing with inverters, and other power electronics at great savings. The FLG gearbox offers limited speed variability but a full CVT would provide even greater benefits. Several CVT architectures are available,” he says.

However, no prototypes have been built yet, admits Kroupa. “All our resources are directed to patenting, licensing, and development with a strategic partner. We just filed a high torque hydrostatic transmissions patent. FrictionLess Gears 2.0 is on the drawing board which is a radically different morphology than the original FLG concept. And I can’t wait to introduce the world to the Dynamically Adjustable Rotor (DNA-Rotor) that I’m working on to provide higher survivability in extreme wind and marine condition of floating turbines. I believe it will revolutionize the wind industry especially with the upcoming extreme scale blades.”