A novel turbine design uses two rotors of equal diameter, one each at opposite ends of a nacelle, to capture wind at greater capacity factors than conventional designs can do, say developer Airgenesis LLC (airgenesiswind.com). The developer says the rotors, offset from each other by 60°, will be turning at low speeds of 2.5 to 3.3 rpm, and are capable of producing 51 kW in wind speeds of about 5 mph. With a maximum of 3.3 rpm, it minimizes the possibility of harming wildlife. The low speeds also minimize the danger of ice throws. “All the high rpm speeds are inside the turbine,” explains company spokesman Clayton Troxell. At a wind speed of 15 mph, the design will be producing over 1 MW with a maximum possible output of 10.7 MW at 32 mph. The design has passed engineering proof of concept and is ready for licensing. Plans are already in the works to build and test a 10.7-MW unit by next year. 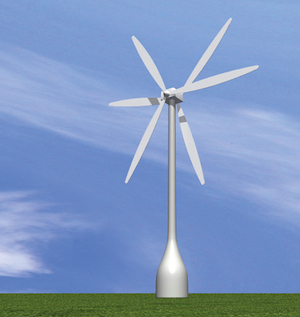 The Airgenesis design uses two rotors, one at each end of a nacelle. Gearboxes and generators mount at ground level for easier access.

There is more to the new design than two rotors. “Most of the heavy equipment is mounted at the base of the turbine so maintenance work can be simplified. Furthermore, using multiple generators provides the capability of replacing generators without shutting down the turbine. Clipper Windpower uses a design of four generators for similar advantages but mounts them in the nacelle. Troxell says many details covered by several patents are being held confidential. The design is said to target a constant electrical output at low wind speeds, conditions in which traditional wind turbines cannot operate.

The company did reveal details of the design to power-plant maintenance expert Jerry D. Casteel who then commented, “Placing components that are costly to maintain to the ground will make the Airgenesis design competitive with fossil fuel and hydro units of the same size.” 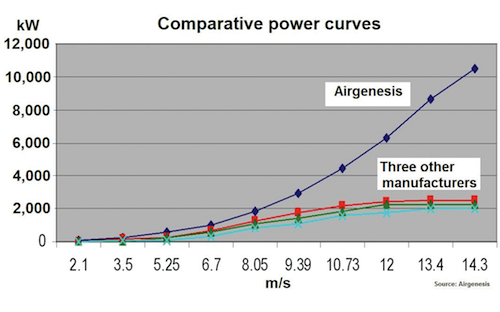 The plot from Airgenesis is said to illustrate the potential advantage of its design over conventional wind turbines.

The company says it is confident the design represents 80% more efficiency than most conventional commercial systems, three times the megawatt production of current ground technology, increased energy to grid, reduced tonnage and stress loads on towers, and complete construction costs of less than $400,000 per MW when in full production along with overall reduced operational costs.
WPE