The Huck BobTail lock bolt looks similar to a nut and bolt but with significant differences.

Torque has taken its knocks as a way to tension a bolt because of the wide load variations it imparts. It’s easy to see that lubricated and dry bolts would generate different loads from the same torque.

Conventional bolts also develop torsional forces from friction and geometric factors between the mating threads, resulting in a 10 to 20% reduction in yield and tensile strength, especially when vibration is present. This calls for retorquing after a period of initial machine operation.

Engineers at Alcoa Fastening Systems  think they have a more reliable fastener in the Huck Bobtail lock bolt. The relatively new (four-year-old) design looks similar to a nut and bolt, but as the illustration Four steps to fastening shows, it works in a significantly different manner. An installation is described in the caption of Four steps to fastening. 1. A worker inserts the threaded pin into a hole and spins the
collar onto it. 2. A hydraulically powered installation tool grabs the annular pull grooves at the end of the pin. Activating the tool lets it pull the pin’s nose assembly into the tool, which pushes a swaging anvil on the collar, drawing up any sheet gap. 3. At a predetermined load, the anvil begins to swage (plastically deform) the collar into the pin’s lock grooves. Continued swaging elongates the collar and pin, developing precise clamp load.
4. After swaging the collar into the pin’s locking grooves,
the tool ejects the fastener and releases the puller.

“Actually, the collar has no threads other than a tab that engages the pin threads,” says Bob Corbett, Huck’s Director of Technical Services. The installation tool reduces the diameter of the collar to swage the pin threads. This allows locking in a tension target within ±6%. “Most often, manufacturers want as much clamp as they can get from a given diameter bolt, about 70% of ultimate,” says Corbett. “When a lower value is requested, we adjust the collar geometry.”

A bump crease, a visual indicactor, on the collar flange indicates that the fastener has been fully swaged on. A visual inspection ensures a complete installation. The company says the fastener installs in half the time of conventional nuts and bolts, about two seconds.

Corbett says a few benefits of the fastener include a high, consistent clamp load, a vibration-proof design, a high fatigue endurance, and high shear and tensile loadings. “The Bobtail lock bolt offers 5 to 10 times the fatigue strength of conventional nuts and bolts because of its shallower locking thread design,” he says. Without a break-away pintail, there is no initiation point for corrosion, thereby eliminating secondary operations on the fastener, such as painting.

Another plus: Full metal-to-metal contact between collar wall and bolt threads eliminates the gap usually found between threads in conventional nuts and bolts. The gap can lead to loosening in vibration-intensive conditions common to wind turbines. The installation tool has advantages for workers as well. For instance, the installation procedure is ergonomic, tooling is light weight so it’s easy to transport up-tower, and no torque or impact transfers to the operator as with conventional hydraulic fasteners. “The installation tool for a 5/8-in. pin weighs only 12 lb, and its relatively quiet, generating less than 70 dB,” says Corbett.

If a fastener has to come off, Corbett says a removal tool makes repairs simple and will not damage other components. Fasteners and installation tools come in a range of sizes and grades. The lock bolts come in five sizes from 3/16 to 1-in. diameters (12.5 to 20mm) and Grades 2, 5, 8, 8.8 and 10.9.

Recently, the fastener was qualified by a German test firm (and DIBt certified) for use on 100m and taller lattice towers that are going up in Europe. Early lattice towers in the U.S. were bolted together and soon vibrated loose, giving way to a preference for rolled steel towers. Such towers at 100m and more can be prohibitively expensive. Because of its tight clamp load control a 1-in. Bobtail is being used to replace a 28mm standard nut and bolt. Corbett suggests that 1-in. diameter BobTail lock bolts will make the lattice tower cost competitive with conventional towers, and maintenance free. WPE 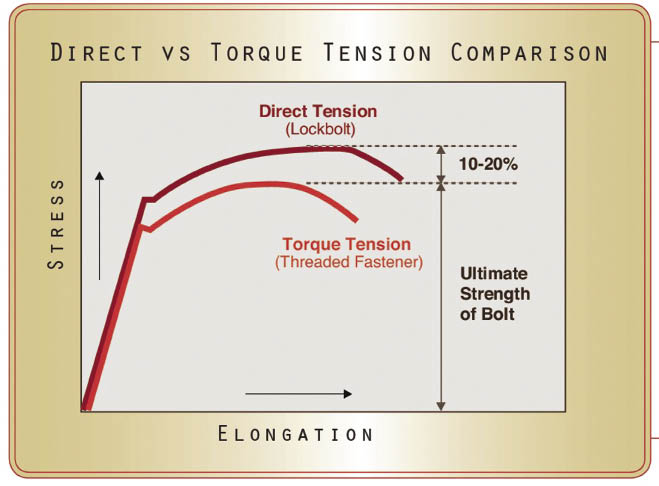