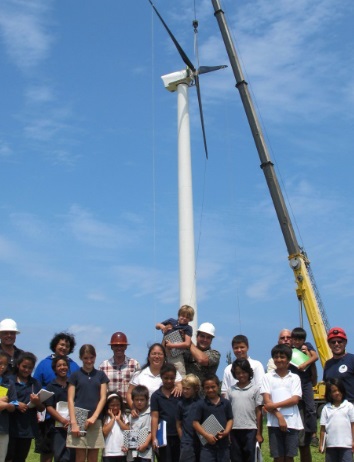 The Northern Power Systems 100 wind turbine specifically supports microgrids, such as this one in North Kohala, Hawaii.

Several farmers in North Kohala, Hawaii, are benefitting from an off-grid water-pumping system powered by a Northern Power NPS 100 wind turbine. Like many others in remote locations and island communities, North Kohala farmers have been searching for an alternative to using polluting, expensive diesel fuel to generate electricity. This microgrid project, known as SkyGrid Energy, marks the growing trend of turning to wind energy as the solution.

The SkyGrid Energy microgrid has been operational since April 2013. In addition to the NPS 100 wind turbine, which is the primary source of energy production, the system also includes a battery bank and solar panels. The system is capable of pumping more than 30 million gallons of water annually and is used to irrigate 400 acres of agricultural land and support 14 participating farms and agricultural businesses. The project was partially funded by the U.S. Department of Energy through the Hawaii Renewable Energy Development Venture. Gen-X Energy Development, the project developer, plans to replicate and deploy this microgrid system throughout Hawaii and other island communities.

Northern Power Systems turbines have been used in microgrid projects all around the world, from Alaska to Newfoundland and the Bahamas to Antarctica.

To learn more about the SkyGrid Energy project and microgrids, join Northern Power Systems at two upcoming events. At the Distributed Wind Expo 2013 in Rochester, NY (June 11, 2013), Alan Axworthy, director, application engineering, will present a case study of the SkyGrid Energy microgrid. Later in the month, on June 24, Paul Dawson, director, sales, marketing and business development for the Americas, will present on microgrids at the Wind-Diesel 101 Workshop, at the Renewables in Remote Microgrids Conference in Toronto, Canada.