Editor’s note: Natural gas and wind power have always been natural allies and the chart just provides more evidence. However, one bar is missing. Consider: Unit Juggler on the web says one million BTUs = 293 kWh, and Chevrolet says its Bolt with a 60 kWh battery will go 200 miles. Therefore, 293 kWh should carry an EV 976 mi. However, correcting that for charge-and-discharge efficiencies of an estimated 80% and we have a blue bar off the chart at 731 miles. What’s more, it would show that an EV recharged by wind-generated power would have gCO2 equivalent/mile at exactly 0. Not a bad deal.
PS. If you battery people would like to provide a more accurate charge-discharge efficiency, please do so. The rest of this article is written by Ookie Ma, Policy and Analysis Portfolio Manager, Office of Energy Efficiency and Renewable Energy

Depending on the technology pathway, one million Btu of natural gas, which has the same energy content of about nine gallons of gasoline, can take a car between 175 and 325 miles, compared to 200 miles for an equivalent conventional gasoline powered car. The DOE presents this incomplete chart.

President Obama, the U.S. Department of Energy (DOE), and many major automotive producers propose that natural gas is a low-carbon transportation fuel that can reduce harmful greenhouse gas emissions. Currently, natural gas fuels 40,000 cars, 70,000 light trucks, and 40,000 heavy trucks in the United States, as well as 15.2 million vehicles worldwide. Although natural gas has been primarily used to fuel large commercial vehicle fleets or heavy-duty vehicles, it is increasingly being considered as a fuel for light-duty passenger vehicles. 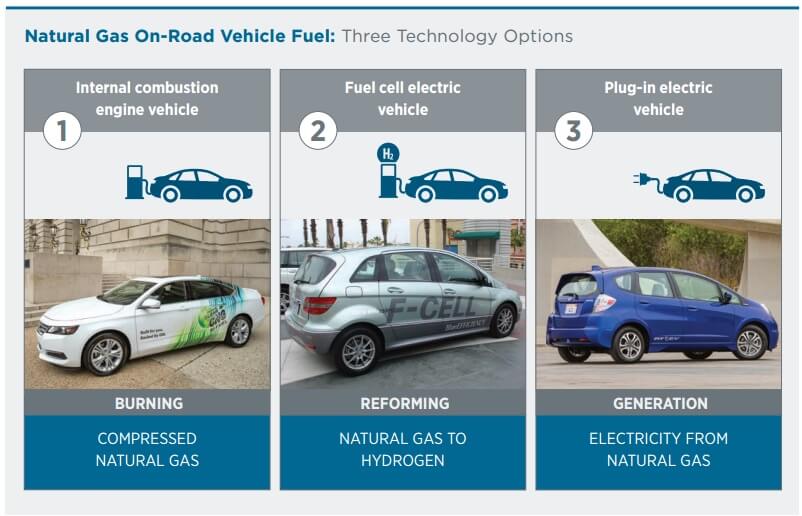