Climate-drying trends and increasing natural resource demands, which include freshwater and minerals for the agricultural and chemical industries are driving a new global growth market. Additionally, provision of these resources can be energy intensive, adding to the cost of production unless addressed through innovation. 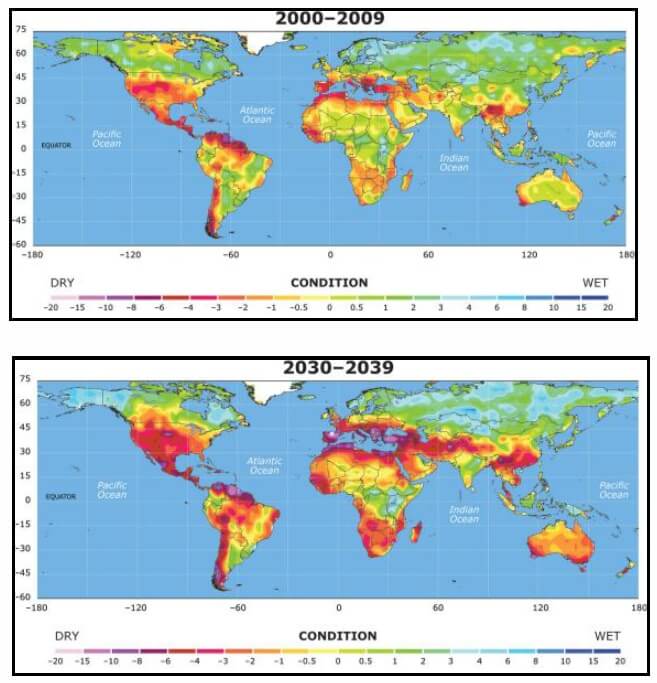 Ocean Naiad is a solution providing fresh water, enriched brine and the flexibility to meet peak electricity demand with wind derived energy. Today, more than one billion people live in areas where water resources are scarce. Global consumption of water could rise by 60 percent in the next ten years on mid-range projections. Some expect competition between cities, industry, and the agriculture sector over the available water resources as well as international tension and conflict over diminishing resources. Climate mapping showing current and predicted drying trends (below), shows that recent drought conditions in the southwest U.S., Europe, and SE Asia are set to continue. However, major population centers are also often coastal cities. Coincidentally, many are adjacent to offshore areas where the wind resource reaches commercial average annual speeds, i.e. 9m/s at a hub-height of 90m. This provides for a solution. Powered entirely by renewable energy, Ocean Naiad is a seawater resource development concept that is both practical and fully commercial. It does not require a financial support framework. Adaptibility of the concept gives it replication potential that is truly global.

A unique and compelling option for the Titan 200 is the inclusion of Texas based companies utility-scale water desalination plant inside the hull. Powered by the wind turbine, this hybrid wind and water system can provide, electricity, drinkable, industrial or agricultural-grade water to coastal and island communities and enriched brine to the agricultural and chemical industries. The Titan 200’s seawater processing system will be a highly productive and energy efficient hybrid of desalination systems in use for many years on hundreds of offshore oil and gas-production platforms.

Sea water fed into the system located several kilometers offshore is relatively free of solid sediments and is much easier to filter and process. This results in a higher water production yield than that provided by onshore water desalination plants. This naturally reduces the frequency of inspections and service. The Titan 200’s seawater processing system will be a highly productive and energy efficient hybrid of desalination systems in use for many years on hundreds of offshore oil and gas production platforms and ocean going vessels consolidated with advanced, energy efficient pre-treatment systems utilized in large onshore desalination systems.

The wind turbines are the prime energy providers for each Titan-based desalination & peaking power plant. The plant, incorporating proven energy recovery devices, ensures superior process energy efficiency while a retail grid connection enables optional ‘pass-through’ of any or all of that energy to the merchant peak power market during high demand / high price periods. Further economic optimisation is possible by importing power during low merchant price periods to supplement the power from the offshore wind farm.

Three contracted revenue streams are envisioned – potable water to local water districts and enriched brine and chemical feed stock to the agricultural, pharmaceutical, chemical, and general industry as well as electrical power to the grid. Initial investigation and modelling indicates these revenue flows combined with sale of surplus power on the merchant market at prevailing rates can produce very attractive equity returns.

Each Titan-based wind and water hybrid system platform can produce up to six million gallons of drinking or ‘finished’ water per day. By installing a water product and electricity export lines to shore from a single Titan platform or multiple Titan platforms, flexible operation enables further optimization by back-feeding power to the seawater processing equipment when windspeeds are insufficient to drive 100% of the system capacity. The Texas Gulf Coast, offshore Galveston, has been chosen for the first ‘proof of concept’ and ‘Commercial Scale’ projects. Persistent drought conditions plus rising demand for water for the growing population for the ‘Texas Triangle’ (Dallas-San Antonio-Houston), from oil and gas production and the need for salt minerals for the agriculture and chemical industries make this an ideal project location to demonstrate the capability to meet the demand.

Wind/Water Desalination Development – Drivers
Within Texas, significant and economically punitive shortages of power generation capacity and water supply have begun to occur as a result of general economic recovery, population increase, industrial demand growth (shale gas), and drought conditions. Decreasing generation margins in the ERCOT system have resulted in increased legal maximum pricing for power production from $2,500/MWhr in 2011 to $9,000/MWhr in 2015 to incentivize ‘peak shaving’ capacity Enterprize Energy and Offshore Wind Power Systems of Texas have entered into an agreement to develop the Ocean Naiad concept, which addresses the needs of Texas, Island Nation States and other coastal cities.
The program comprises: .

Economic analysis of the Ocean Naiad concept demonstrates an extremely robust commercial case that does not require any form of subsidy or grant and assumes known commercial terms in the market place available today:

This is a special note regarding the drought conditions as it pertains to Texas Industry. There are $14 billion of New Projects approved for Construction on the Texas Gulf Coast and more are coming, but, there is no new water supply. .

The answer is the Titan Ocean Naiad

Each Titan platform is configured to produce 6 million gallons per day of industrial water supply and 6 MW of electric power as supply for water production or as a alternate power source inland. his source of water and power is completely renewable and continuously available without interruption. Therefore industrial operation can occur on a 24/7 bases. Industrial expansion is easily archived as our systems are scalable and can be supplied inside of the delivery of the plant, and typically at 25% of the CAPEX cost other sources of energy and water.

Alternate beneficial application of the Titan system is production of Minerals from the sea water process,
Many of the chemical constituents in geothermal fluids like sea water are a potential source of valuable minerals and metals. Recovery of minerals and metals from sea water can be viewed as “solution mining by nature” followed by application of established or new hydro-metallurgical techniques for isolation and purification

These solution are then concentrated and separated for industrial “Feed Stock” use by chemical, pharmaceutical and industrial companies in their production of products, this allows for a “Zero” base discharge of concentrates back into the ocean.

The economic comparison in the following table illustrates the economic benefits of the Titan Wind & Water System versus a recently completed conventional system.