Hundreds of Marylanders filled the Joint Hearing Room in Annapolis to capacity on Thursday night, as legislators, business leaders, labor groups, environmental organizations and concerned citizens gathered to support plans for Maryland’s offshore wind project. The public hearing was the second of two meetings scheduled by the Maryland Public Service Commission (PSC), which is considering applications for the Offshore Wind Renewable Energy Credits (OREC) created by the Maryland 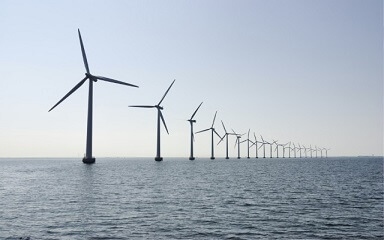 The waters around Baltimore may look more like this in the future if plans offered by US Wind Inc move forward.

Offshore Wind Energy Act of 2013. The first meeting was held in Berlin, Md. on March 25.

Baltimore-based US Wind, Inc. plans to build a 750-megawatt wind project off the coast of Ocean City, Maryland. The project would be the first large, utility-scale offshore wind project in the nation, and US Wind officials say it would enable Maryland to become the Atlantic coast hub of a new, promising industry. US Wind projects that full build-out of its project will bring 5,000 manufacturing jobs to Maryland and generate over $16 billion in net economic output over the life of its 750 MW Maryland project.

No one spoke in opposition at Monday’s hearing.

According to its website, the Maryland PSC must approve, conditionally approve or deny the proposed offshore wind project applications no later than May 17, 2017. Information on the applications may be viewed or downloaded on the Commission’s website at www.psc.state.md.us

Filed Under: Offshore wind
Tagged With: maryland, us wind inc