Totaro & Associates, a Houston, TX based research and consulting firm has released a new research report on the pace of wind turbine technology innovation and proliferation.

IP ownership rankings show General Electric still leading with over 1,400 patent families, and the ability to now leverage the Alstom wind portfolio which puts the combined total above 1,550. Siemens has overtaken Vestas for #2 as predicted in last year’s report, and Mitsubishi drops from #4 to #5. Previously outside the top 10, Guodian United Power has rocketed up into the #4 spot due to more patent filings in 2012 than any other company, although most filings were exclusive to China. 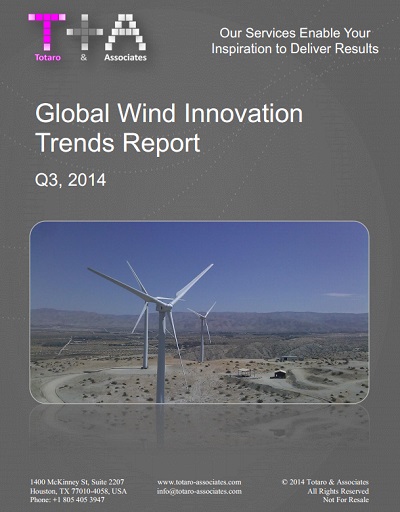 The past year has seen the penetration of some non-practicing entities (NPEs), more commonly referred to as ‘patent trolls,’ into the wind market.

The top 10 wind turbine manufacturers control more than 56% of all wind patent filings, as well as over 77% of the patents which are broadly applicable to the entire industry or potentially infringed. This strongly suggests the concentration of innovation in wind lies with those who can afford it.

The pace of patent filings has finally dropped for the first time after an average CAGR of 47% during the 2007 to 2011 time-frame. The report indicates only a 7% growth in the number of global patent filings in wind in 2012 vs. 2011 and a slight decline for 2013 is expected as the recent market downturn has put a damper on research and development (R&D) spending and expenditure on IP protection.

Market conditions indicate that the pace is set to increase again in the coming years due to an increased commitment of expenditure on R&D. Some companies are spending up to 6% of their revenue on R&D, which is almost double the spend rate in 2010 after the financial crisis. Filings are expected to return to the levels seen in 2011 by 2015/16, although the average CAGR is expected to be a more modest 5 to 10%.

Globally, the entire wind industry has spent $522 million to date on patent protection. Expenditure on IP protection by wind companies is expected to escalate, with $1B to be spent by 2019 and $2 billion by 2026.

The past year has seen the penetration of some non-practicing entities (NPEs), more commonly referred to as ‘patent trolls,’ into the wind market. These companies acquire orphaned intellectual property assets or develop their own patent portfolios specifically for the purpose of monetizing against the entrenched players in the industry. “With so many patents available for acquisition in the past 18 months, it is no surprise that these NPEs are seeing an opportunity to take advantage of market timing and attempt to drive up costs for operating companies in wind,” says Philip Totaro, the founder & CEO of the company.

The full report is available from Totaro & Associates at:
www.totaro-associates.com