In May, teams from 12 universities across the country descended upon New Orleans to compete in the Energy Department’s second biennial Collegiate Wind Competition. The competition is designed to integrate real-world scenarios of engineering tests and business pitches to determine which team created and marketed the best wind turbine design. The Pennsylvania State University’s Winergize team took top honors back in May, and they came to Washington, D.C., earlier this week to display their prize-winning wind turbine in the lobby of the Energy Department’s headquarters. During the exhibition in the Forrestal building, the team joined Acting Assistant Secretary for Energy Efficiency and Renewable Energy David Friedman, Wind and Water Power Technologies Office Director Jose Zayas, and the Collegiate Wind Competition Organizing Team.

The competition represents the best and the brightest of future leaders in the wind industry. Check out this video that highlights the amazing innovation that takes place during the competition.

Congratulations to Penn State and all of the competitors on their victory. We can’t wait for the next Collegiate Wind Competition! 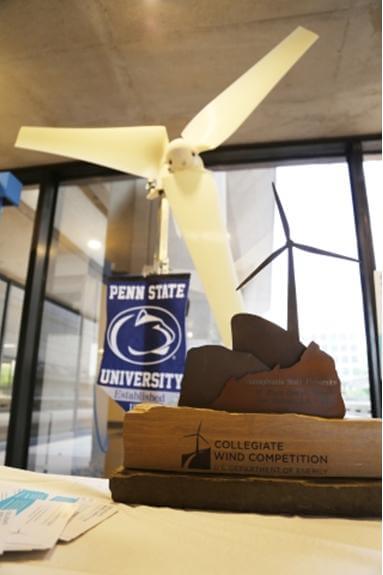 The Penn State team brought its prize-winning wind turbine to the Energy Department in Washington, D.C.