A recent poll shows just how out of step state lawmakers are with the average Ohio voter on clean energy and energy efficiency issues.

The survey of 405 registered Ohio voters shows that support for clean energy and energy efficiency is strong, with support cutting across age, gender, and political affiliation. 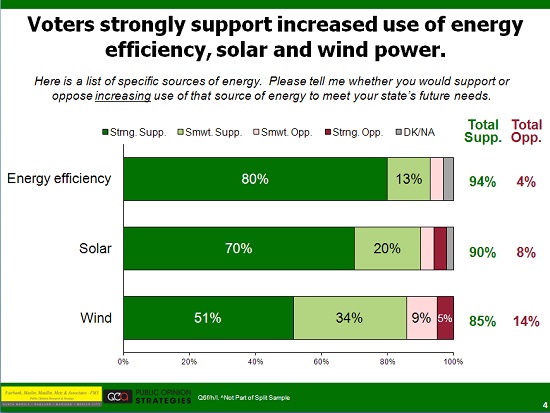 “When it comes to clean energy, Ohioans just get it. Ohioans want more clean energy, not less. But that’s not how most lawmakers at the Statehouse in Columbus are voting,” said Brian Kaiser, Director of Green Jobs & Innovation for the Ohio Environmental Council.

“The problem is that politicians in Columbus are more concerned with the opinions of utility giants like FirstEnergy and fossil fuel funded special interest groups than they are with the views of the average Ohioan.”

When asked whether Ohio should get more or less of its energy from renewable sources, nearly three quarters of poll respondents said more. That’s in stark contrast to the hotly contested vote cast by the Republican-controlled legislature and approved by Governor Kasich that weakens and puts on hold for two years Ohio’s clean energy standards while a so-called “Energy Mandates Study Committee” reviews the policy.

The poll, while showing strong support across a variety of clean energy resources, also shows that support for increasing energy efficiency is off the charts. When asked whether Ohioans would support or oppose increasing use of energy efficiency to meet Ohio’s future energy needs, 94% said they are supportive. Ohioans showed similar enthusiasm for other forms of clean energy:

The survey also demonstrates that as Ohioans go to the ballot box this fall, they’ll be looking to support candidates who share their views on energy policy. Nearly two-thirds of Ohio voters would support “A candidate who wants to promote more use of clean, renewable energy – like wind and solar power – in Ohio over a candidate who wants to continue to rely on coal, natural gas or nuclear power to meet Ohio’s energy needs.

The state-wide public opinion survey was commissioned by a coalition of environmental and conservation organizations within the RE-AMP network and conducted by a bipartisan research team of Fairbank, Maslin, Maullin, Metz & Associates (D) and Public Opinion Strategies (R), as part of a multi-state poll on energy attitudes in the Midwest.