SaskPower, the principal electric utility in the province of Saskatchewan, has committed to reducing emissions for a more environmentally sustainable future.

SaskPower, the principal electric utility in the province of Saskatchewan, has committed to reducing emissions for a more environmentally sustainable future. The corporation has set a target to double the percentage of renewable electricity generation capacity in Saskatchewan by 2030.

“An objective of 50% renewable power by 2030 is ambitious, but I’m confident SaskPower can meet the target by taking an ‘all of the above’ approach to planning,” said the Minister responsible for SaskPower, Bill Boyd. “That means a major expansion of wind power augmented by other renewables, such as solar, biomass, geothermal and hydro, to go along with the world leading Boundary Dam 3 carbon capture project and more natural gas generation. This is the framework for a responsible clean energy plan that will reduce greenhouse gas emissions while ensuring Saskatchewan has a reliable, affordable supply of electricity for years to come.” Today, about 25% of Saskatchewan’s generation capacity comes from renewable sources – 20% from hydro and 5% or 220-MW from wind. Three new wind power projects already approved or in development and will add another 207 MW of renewable generation by 2020.

SaskPower’s plans to expand wind could make the company a leader in Canada. However, SaskPower President and CEO Mike Marsh emphasized that adding wind and other renewables in a way that’s affordable for customers is what’s important. 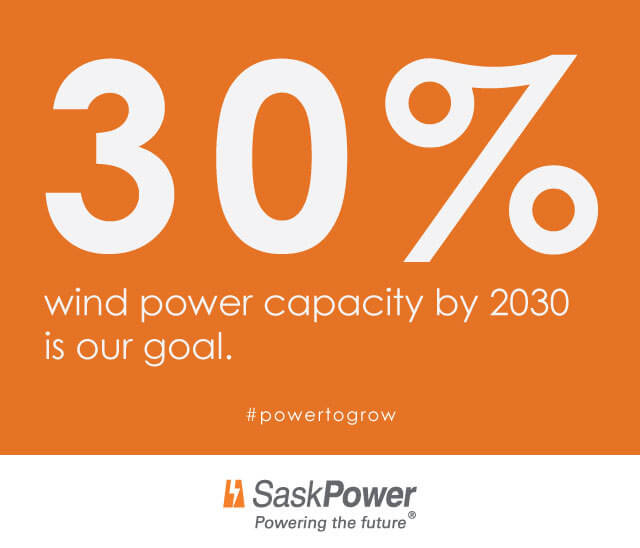 “The key here is that wind power has become much more economic over the years as the technology has developed. We’ve been able to understand how wind operates on our grid so we can add it in a way that balances our priorities of maintaining a sustainable and diversified generation mix with the delivery of reliable and cost-effective power to our customers,” said Marsh. “We’ll take that same approach to adding other clean options to make our renewables target of up to 50% by 2030,” he said.

To meet the target of up to 50% of SaskPower’s generation capacity from renewable sources, the corporation will be moving forward with procurement of another 100 MW of wind generation in 2016 and will develop up to 1,600 MW of new wind generation between 2019 and 2030.

“SaskPower’s new wind energy targets represent an important step forward for wind energy in Saskatchewan and will enable the province to capture more of its plentiful and cost-effective wind-energy resources,” said Robert Hornung, President of the Canadian Wind Energy Association (CanWEA). “An initial procurement of 100 MW of new wind energy in 2016, followed by a series of planned future procurements for additional wind energy, will attract significant interest and ensure a highly competitive process that will produce low cost clean electricity generation for Saskatchewan ratepayers.”

Adding more clean electricity builds on SaskPower’s innovative carbon capture and storage initiatives, which the corporation will continue to explore in order to determine how to replace conventional coal-fired electricity generation in light of existing and emerging greenhouse gas emissions regulations.

Additional information can be found at http://www.saskpower.com/blog.