A set of three blades with active surfaces and sensors will allow writing controls that tailor blade shape to wind conditions, and ideally capture more energy than conventional designs. 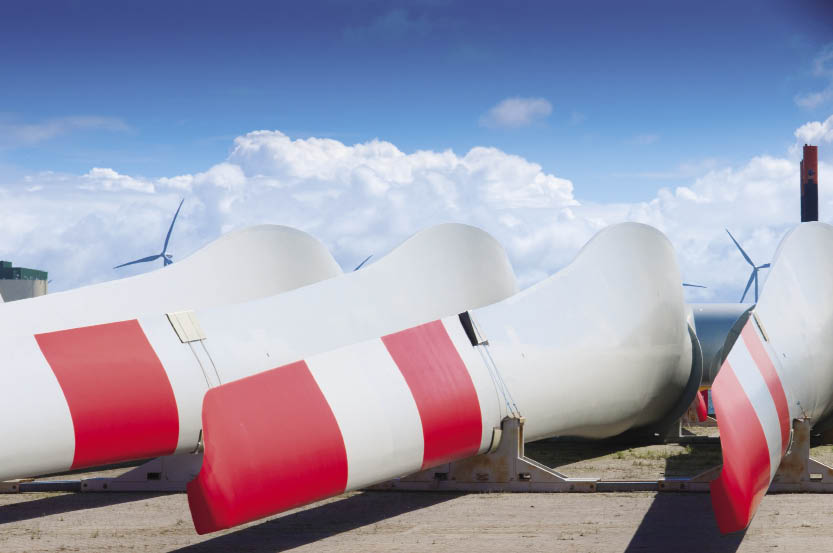 Static blades such as these are a compromise of aerodynamic charactersitics. Dynamic blades with movable surfaces will let turbines generate more power.

With a power generation capacity of more than 215 GW worldwide, wind clearly tops the renewable energy scoreboard. It grew by almost 18.5 GW in the first six months of 2011. However, this continued growth alone is not enough to meet goals discussed at the World Climate Council, or defined in the Blueprint for a Secure Energy Future. Meeting these goals will require additional investment and innovation. Duke Energy CEO James E. Rodgers, a member of the Copenhagen Climate Council, agrees. “It is a myth that we have the technologies to do the job. We don’t. New technologies are crucial, as is further development of existing technology.”

As for power generation, the industry has progressed in making renewable-energy resources more competitive. Many challenges, however, need overcoming to lower the cost of energy (COE) and further increase its acceptance. Just focusing on wind-power generation, by far the largest source of clean energy, it is evident that further industry growth will be difficult.

Consider Germany. The nation focused on renewable energy early and has recently decided to completely move away from nuclear power. Today, wind energy accounts for about 7% of German energy generation. To meet increasing demand and compensate for the nuclear-power plants that will cease production by 2020, the nation aims to up that number to 25%. To do this with current technology would require building 1,000 additional wind turbines per year. But with an area smaller than California and less than 2% of it suitable for wind-power generation, Germany needs higher-efficiency turbines to meet its ambitious goals. 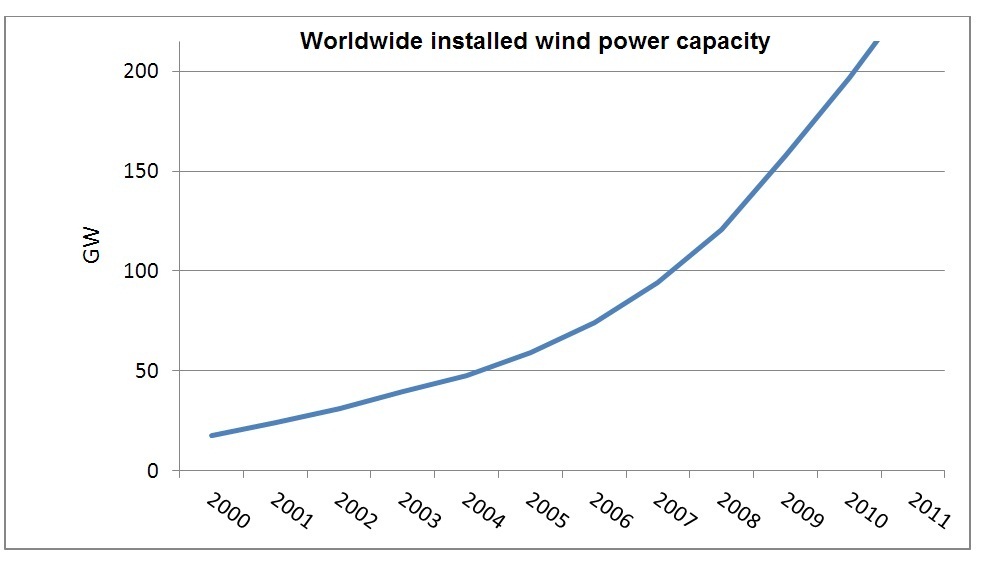 One prevailing wind-turbine technology trend throughout the past couple of decades has been increasing the rotor size. This facilitates the harnessing of generally higher winds available at greater heights and increases nominal power ratings. Studies on a 1.5-MW turbine show that increasing blade length by 10% results in 10 to 15% more energy capture and a 5 to 9% decrease in COE.

Today’s standard turbine provides 3 MW of power, but the recent E126 turbine from OEM Enercon provides 7.5 MW. Its 200-m height and almost 60-m blades support a nameplate of more than twice that of the current standard. The next power class of turbines is already on the horizon. For example, leveraging innovative lightweight materials and superconductors, American Superconductor Corp. is working on a 10-MW turbine aimed at large offshore wind projects to further lower the COE and attract more investors.

Most long blades are possible through efficient structural design and optimal material use, which produces the necessary structural capability for 60-m blades.

Engineers and scientists face diverse difficulties. Future designs for even larger machines will continue to push design limits. For instance, blade-length limitations induced by the penalty of weight can only be pushed so far through new materials and optimized mechanical structures. In addition, the higher altitudes these longer blades reach provide the benefit of higher wind speeds, but they must also handle higher gusts. Therefore, these larger wind turbines must operate under turbulent and unpredictable environmental conditions. This results in loads that quickly vary and are spaced along the blade due to the impact of gusts. The resulting oscillating (or fatigue) loads are the design drivers for the blades and core components of the drive train. This means massive research and innovation for more sophisticated load-control techniques.

One promising approach is the addition of active aerodynamic load control (AALC) devices. These are distributed along each blade to provide feedback load control. This technology is often referred to as a ‘smart structure’ or ‘smart rotor control’ and includes trailing-edge flaps or deformable trailing edge geometries with associated sensors and an embedded control system. AALC are receiving significant attention because of the direct lift control capability of such devices and recent advances in smart material actuators. Their short response time and relatively small size compared with the blade length of AALC seems independent of the existing blade-pitch control and could be a good supplement to it.

One of the leading research institutes in this technology is Sandia National Laboratories. Sandia conducts applied research to increase the viability of wind technology by improving wind-turbine performance and reliability and reducing the cost of energy. Sandia specializes in all aspects of wind-turbine blade design, manufacturing, and system reliability. By partnering with universities and the industry, Sandia works to advance the state of knowledge in the areas of materials, structurally efficient airfoil designs, active-flow aerodynamic control, and sensors. Lab researchers are investigating integrated blade designs where airfoil choice, blade platform, materials, manufacturing process and embedded controls are all considered in a system perspective. By collaborating with operators, developers and manufacturers, Sandia evaluates reliability problems and develops tools and methods to anticipate and investigate future reliability issues. Over the last few years, Sandia has been instrumental in validating the value of AALC. The Lab has performed extensive simulations with a focus on estimating a damage reduction on rotor and gearbox, and on the technology’s COE benefits. As a next step, scientists and engineers are validating the simulation results with real-world data and implementing a prototype of a smart rotor to learn more about the potential and technical challenges of using AALC. For this purpose, the Sandia team operates a small test turbine equipped with a set of 9-m blades with chord flaps that cover about two meters on the outer area of the blade span. Besides validating simulation results and getting a better understanding of how to model smart rotors, the research project’s goal is to evaluate different sensor systems to provide input and feedback signals for the AALC controller. The sensors must be durable enough to withstand the harsh environments into which they will be deployed. For the instrumentation of the smart blades, Sandia adopted controls that combine an open embedded architecture with small size, extreme ruggedness, hot-swappable industrial grade I/O modules, and compute power from a field programmable gate array.

A wind turbine is a highly coupled dynamic structure because of its slender geometry and flexibility. Consequently, Sandia had to develop a sensor-optimization strategy and state estimators to maximize the performance of the controls observer and minimize the number of required sensors. The technology in these sensor optimizations includes a modal filter for stochastic monitoring, a patented static blade-deflection estimator based on centripetal acceleration, and order analysis for the deterministic monitoring of structural response. The illustration identifies the type and location of sensors used along each AALC turbine blade.

In addition to finding the best locations and comparing the quality of the sensor information as input for the control system, Sandia focused on ruggedness and reliability, knowing that electrostatic discharge (ESD) is a field-test hazard that contributes to sensor failure. Lightning is a well-known example of ESD but the sensor system must deal with other physical phenomena. One is the tribo-electric effect which leads to a static build-up of charge due to the contact and separation of dissimilar materials. Another large charge comes from air passing over turbine blades. These can vary significantly along the blade, leading to discharges from one portion of the blade to another, or to the ground. To acquire all this sensor information and correlate it precisely via GPS timing, Sandia developed a rugged and reliable, hub mounted data acquisition system using NI CompactRIO hardware that wirelessly transmits information to a control center. There, data is merged with information from additional sources.

Leveraging this scientific instrumentation system, Sandia will start collecting real-world data from the working wind turbine. This data will allow performing system identification and modeling. For this purpose, the Lab will first perform open-loop tests. The collected information will help confirm and calibrate previously designed models within a simulation environment. These calibrated models will then serve as a foundation for the development of a Reduced Order Model that will be used for the Multi-Input Multi-Output design, implementation, and validation of a controller for a smart rotor. While this is the primary reason for developing the instrumentation and data-acquisition system, the improvements and lessons learned from this development may be immensely valuable to the wind-turbine industry in general. The embedded monitoring system also provides unique techniques for monitoring rotor performance and structural health. This technology could easily be adopted to estimate current loads and the state of damage. In this way, Sandia will be able to predict the future life of the rotor based on damage-growth models.