That thing in a wind turbine that actually makes electricity − how do you monitor its health to ensure it works for a long time? The more common practice of vibration analysis is somewhat limited when it comes to determining the health of a generator. To understand or establish a condition monitoring approach, we should first understand the failure modes and root causes to those failures.

About 50% of drivetrain failures are in the generator with annual failure rates ranging from 5% up to 15% with an average around 10 to 11%. This is based upon 10 GW’s of vibration analysis. 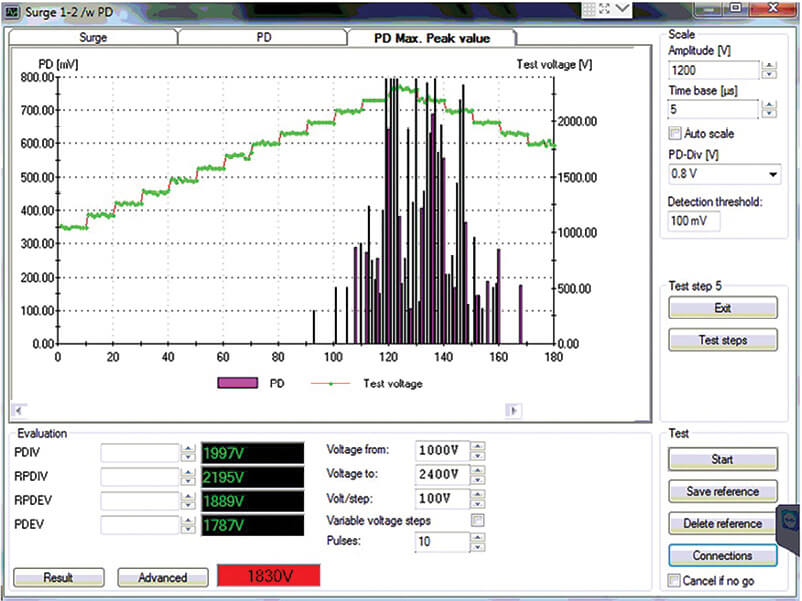 A stepped-voltage surge test is plotted by the green line in the graph. The partial discharge of voltage is shown in the vertical graph bars as the voltage is increased. Partial discharge of voltage has been measured as part of maintenance programs only in the past 15 years while test technology has made significant progress in the past 5 years.
Image courtesy of Schleich.

Up-tower repairs average $5,000 to $6,000 for a generator bearing change out and $80,000 to $90,000 for an unpredicted failure that requires a crane. The wide price differences show that predicting failures has a tremendous return per event. 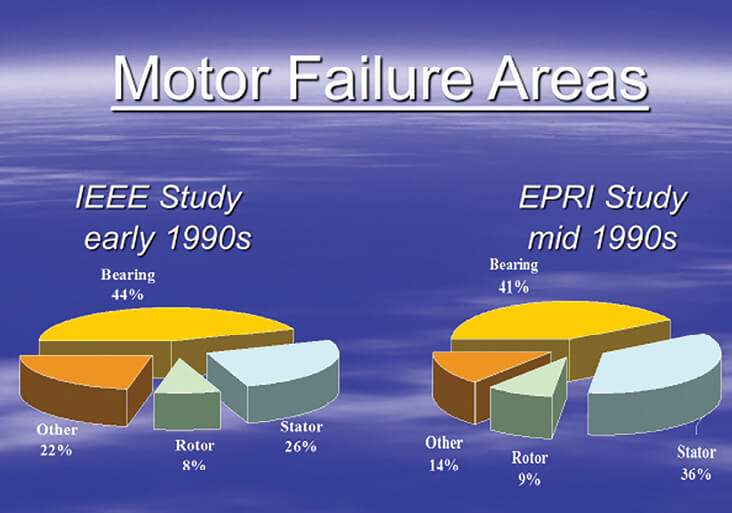 The failures are centered on the generator bearing and are rooted in three major factors that account for 66% of the generator failures. These are easily seen in vibration analysis and include:

But electrically speaking, how do generators fail? Failures at the ground wall (windings to the generator frame insulation) are one source and failures between the windings (turn-to-turn insulation) is another.

So how do you test for electrical resistance, partial discharge, surge test, and other indicative tests of generator health? Suppliers for specific electrical test equipment can provide diagnostic systems. These are not the multi-meters you find in the big-box hardware stores. A missing wedge at the top has caused a coil failure in a wind turbine generator.
Image: Success by Design.

In speaking with two major wind-industry focused, generator rebuilders, the hands down leading cause of electrical failure is a short-to-ground somewhere within the generator. In fact, the Electro Mechanical Authority (EASA) suggests tests for such a fault at two to three-month intervals. These tests, however, are rarely if ever performed in the wind industry. Having used these testers myself, I can say the total test time is less than 15 minutes.

There are many electrical tests not widely used on wind turbine generators and pad-mount transformers. The following are standard tests suggested by either EASA or IEEE (Institute of Electrical and Electronics Engineers) or both. Visit either website and you will find recommended practices and standards. EASA’s AR100-2015 Recommended Practice, outlines several tests in Section 4 that range from Phase Balance to High Potential (hipot). The point of these tests is to determine the health of the generator insulation and its internal windings. A few other tests include a:

Resistance test which looks for an interruption in the windings through a resistance measurement. This test takes one minute. High readings indicate a resistance that should not be there, which signals an issue.

Polarization index test includes a one minute and a 10-minute test. Others can use a 30:60-second test. The tests look for an insulation issue between the windings and the frame. It is useful in determining the insulation condition. Degradations are determined and ranked based upon the 1 to 10-minute test as well as a comparison of the previous measurements. In some cases, the degradation can be fairly long in lead time.

Winding surge test is a high voltage, short-term test using a voltage of twice the circuit rating plus 1,000 volts. The purpose of the test is to determine voltage leakage. One manufacturer’s tester has the ability to perform a partial discharge as a secondary test.

Several additional tests are not as widely used in the field and are more like QC measures. These include:

Of course, there are also standards for balancing, vibration, and lubrication. The vibration is really not all that useful in the existing recommendations. It is useful indicating something significantly wrong in installation, alignment, or balance. Still, a little benchmarking is more helpful than none at all.

Resources for generator acceptance by either an owner or OEM can be found in the EASA Standard AR100-2015 which is a good place to start. This is recognized as an ANSI standard. Other standards for repair include mechanical repair, rewinding testing, lubrication, and even shaft runout. Secondly, similar resources can be found through NETA or IEEE.

Using these best practices and standards, a wind-farm owner can develop and acceptance program for rebuilt generators, a field test for condition monitoring and predictive maintenance, as well as commissioning and end-of-warranty (EOW) information.
The added effort and attention in this area offers large payoffs. In this age of performance data mining and minor incremental fleet improvements, the basics are sometimes overshadowed. Someone should be looking at the thing that makes the electricity.