Laufer Wind has announced the successful demonstration of its Aircraft Detection Sight Solution (ADSS), the first-ever trial against a radar-activated obstruction lighting system on a wind farm in the U.S. The Federal Aviation Administration (FAA) and the Energy Department’s National Renewable Energy Laboratory (NREL) participated in the trial. 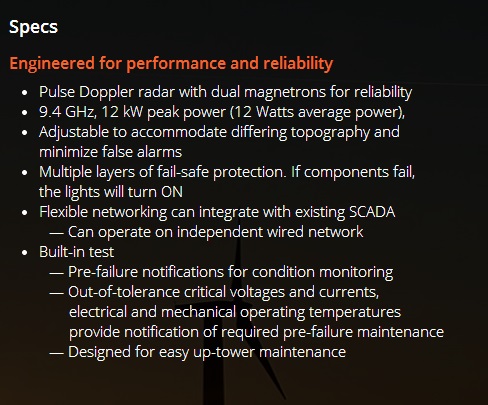 The demonstration consisted of Laufer Wind radars deployed around NREL’s National Wind Technology Center, controlling lights on an Alstom 3.0 MW turbine, a GE 1.5 MW turbine, and on a meteorological tower. FAA representatives flew various patterns against the ADSS, observing operation of the system from both the plane and on the ground. The purpose of the evaluation was to test the Laufer Wind ADSS system against a series of performance standards that the FAA has developed to address Aircraft Detection System (ADS) technologies that will minimize the impact of FAA-required obstruction lighting on nearby communities and wildlife yet at the same time maintain a high level of safety for pilots operating aircraft near the obstructions.

The FAA is not changing the obstruction lighting guidelines for wind turbine farms. This technology is simply a smart switch that will activate the lighting when an aircraft is within 3 nautical miles of any part of the obstruction. Using a small aircraft, FAA researchers conducted a series of flights around the NREL facility to verify that the ADSS system was able to demonstrate the required detection capabilities and activate the obstruction lighting as required. After its evaluation, the FAA was able to confirm that the Laufer ADSS system has met the requirements set forth in its performance standards. The FAA will be documenting the effort in a technical report that will be published within the next few months.

“We’re thrilled that the ADSS performed as expected and met all of the FAA requirements,” said Eric Laufer, Founder and President of Laufer Wind. “We’re grateful to NREL, the FAA, and Alstom for participating in the first successful demonstration of an Aircraft Detection System on a wind farm in the U.S.”

“It is exciting to know that radar-activated obstruction lighting will soon be available to customers in the U.S.,” says Jon Campbell, Innovation Program Manager at Alstom. “We’re pleased to have been involved with Laufer Wind’s project, by leveraging our ECO110 R&D platform to validate the ADSS in a real-world environment.”
Laufer Wind