The multinational Enertec DaaS and digital management company, Kaiserwetter, released the report ‘Renewable Energy Assets and Funds Report 2018,’ which identifies the top investment funds exclusively within the renewable energy sector. Analysis of this report reveals a record high of $280 billion worth of new investment entered the sector in 2017, and $114 billion of this came from the transactions of assets.

“Our research reveals the investment trend in renewable energy and, particularly in technological or digital assets within this sector. There is a general consensus to increase investments in the transition of power generation toward renewable energies, which acts as an engine of growth in economies,” explained Hanno Schoklitsch, CEO of Kaiserwetter. 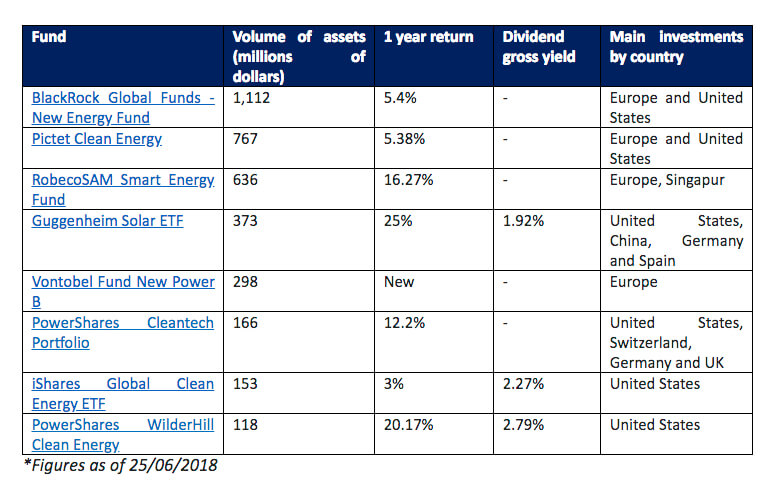 The ranking of investors in the report includes some exchange-traded funds that are very appealing to the average investor, for both their revaluation and growing dividends. According to Kaiserwetter, investment in the renewables sector depends on the changing characteristics: the secure stock, whether it is more profitable and stable in comparison to gold, and the sovereign bonds of developed countries.

The analysis shows that the main funds within the sector control assets valued between $1.1 billion and $110 million. At the top is BlackRock New Energy Fund, whose portfolio includes renewable giants such as Enel, Kingspan ,and Vestas, while in second and third place sit the European fund Pictet Clean Energy and RobecoSAM respectively.

The fund managed by Black Rock has its main investment area in the Euro Zone (37%) and the United States (28%). In turn Pictet Clean Energy primarily invests in the U.S., followed by the Euro Zone and China (8.57%), while RobecoSAM invests in Europe and Singapure. This indicates how, in spite of funds mainly investing in Europe and the U.S., Asia is developing into an appealing market.

Kaiserwetter’s analysis reflects the annual revaluation of the main funds in the renewables sector, which has a very hight return on investment. Four funds in the list exceed the 12% yearly return, with Guggenheim Solar ETT, the fourth fund in the ranking, proving itself to be the undisputed leader in terms of profitability. It is also the largest exchange-traded fund in the list, and is accessible to the average investor. In just one year, this fund has achieved more than a 25% return on investment.

In regards to the kinds of assets in which these top funds invest in, there is a tendency to opt for assets related to information technology associated with renewables, with infrastructure assets following behind as an alternative choice. Guggenheim Solar ETF, for example, is a prominent technological fund, as 57% of their assets are tech-related. Pictet-Clean and PowerShares WilderHill Clean Energy Portfolio also prefer this kind of assets, with 40% of their assets being tech-related. Other major funds such as PowerShares Cleantech (with Kingspan and Siemens topping its portfolio), primarily invest in industrial assets (55%), followed by smart technology assets (25%).

The analysis states that among these technologies in which most fund’s investment rely, there is Smart Data Analytics and cutting-edge digital technologies such as the Internet of Thing , which help to minimize costs and maximize profits. In fact, the corporative research and development in clean energies reached US $4.8 billion in 2017, which saw an increase of 12% on 2016, and is the highest recorded figure to date.

“The future of renewables as a safe and valuable investment is secured through the use of digital platforms such as ARISTOTELES by Kaiserwetter, which offers Data as a Service to investment funds and financial institutions owning assets in the sector, to help them minimize investment risks and maximize returns,” said Schoklitsch.