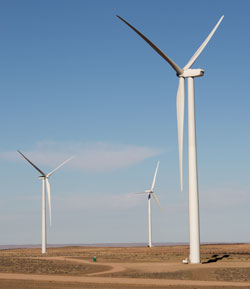 Tri-State has a 20-year power purchase agreement to receive all the electricity and environmental attributes from the wind farm, which is jointly owned by Alliance Power of Littleton, Colo., and GE Energy Financial Services of Stamford, Conn.

The expansion of Colorado’s newest renewable energy facility is complete, with the Colorado Highlands Wind project now capable of generating 91 MW of electricity for Tri-State Generation and Transmission Association. The facility came on-line in December of 2012, with 42, 1.6-MW GE turbines capable of 67 MW.  The expansion – which was announced in April and began construction in July – consists of an additional 14, 1.7-MW GE turbines, increasing the facility’s total current capacity by 36%.

Tri-State has a 20-year power purchase agreement to receive all the electricity and environmental attributes from the wind farm, which is jointly owned by Alliance Power of Littleton, Colo., and GE Energy Financial Services of Stamford, Conn.  It is located on 6,640 acres in northeast Colorado’s Logan County – in the service territory of Tri-State member co-op Highline Electric Association.

“Colorado Highlands Wind has been performing extremely well since being brought on-line late last year,” said Tri-State senior vice president Brad Nebergall.  “Since it was originally designed to accommodate 91 MW on the existing transmission system – and since Tri-State is always proactively pursuing projects that make sense for us and our member electric co-ops – the expansion of Colorado Highlands Wind was an opportunity we quickly embraced.”

In 2010 the wholesale power supplier began purchasing the electricity generated at the 51-MW Kit Carson Windpower Project in eastern Colorado as well as the 30-MW Cimarron Solar Facility in northeastern New Mexico.  Combined with Tri-State’s renewable hydropower resources, renewable energy generation makes up approximately 18% of the energy the association provides to its member co-ops.

In addition, Tri-State’s member co-ops have another 49 megawatts of local, community-based renewable and distributed generation projects in operation or scheduled to be operational in the near future.

In 2013, Tri-State adopted a new wholesale rate, along with demand management and energy shaping product offerings that, among other benefits, will assist the association to better integrate intermittent renewable resources into its power supply.